Hearing danger you can opt to not see 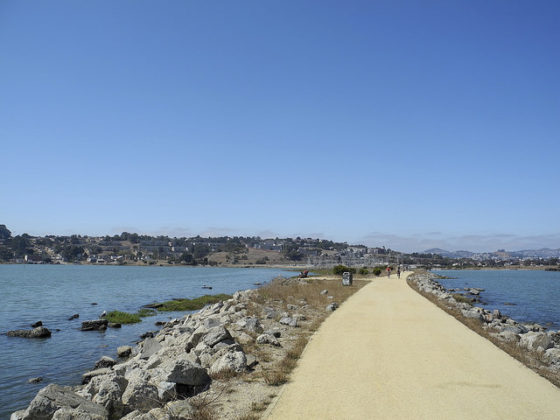 There’s a small wildlife habitat in a toxic harbor across the city from where I live. It’s a brief strip of ecological consciousness-raising that juts out into a part of the bay that bears the residue of generations of shipping and other industrial activity. The salt marsh emerged decades ago when a planned port on the minuscule peninsula failed to materialize. Government agencies and non-profits collaborated to build on the marsh’s natural momentum. Now eager birders can take morning strolls amid the carcinogens, in clear view of discarded buildings.

I took a walk there yesterday. The habitat proved to be a long, narrow path between an anonymous bit of land and a modest port. Along the path were large concrete blocks that served as benches. The concrete was a smart design touch. It brought the warehouse vibe of the encompassing area into the naturalist fold. It suggested that, through creative reuse, the materials of the error-ridden past might just yet be transformed in the service of a more considered, sustainable future.

The view during the walk was instructive. If you looked straight ahead you saw the path and small batches of brush, perhaps the passing freighter, and then the land across the bay. If you looked left or right you saw evidence of the ongoing if quiet functional use of the marine infrastructure. If you looked back, the path bent enough that you didn’t see the large-scale power station. Birds sang out in stereo, a large flock of seagulls on one side, and a type I couldn’t identify on the other. They sang out in seeming willful ignorance of each other, and of the other sounds that lingered in the air: helicopters, planes, the light roar of ships, the pounding at a construction site at the foot of that power station, and the excited chatter of avifauna aficionados. Of them all, the diggers were the most confrontational, the most out of step. They rumbled for short stretches and then paused, just long enough to lull you into a pastoral daze before someone flipped a switch and they rumbled again.

There was no firm border between where industrialization ended and the natural habitat began, nor a clear sense of which encroached on which. You could turn away from the view you didn’t desire, but the sounds of the ships and the diggers, much like the legacy chemicals, were pervasive — except that the chemicals remained invisible in the soil and water alike no matter where you looked. Several years ago, a simple sonification experiment was developed to raise awareness of the toxicity in the air of a commuter tunnel. A piece of narrative sound was made that produced in jarring tones the relative density of toxins; the length of the piece matched the average length of time a vehicle might spend in the tunnel. You heard what you would breathe; it was quite effective in making an important environmental impression. Along the path at the wildlife habitat, the industrial noises provided a spontaneous form of sonification, a reminder of dangers you couldn’t see.

(Photo of the location by Diane Yee, used via Flickr and a Creative Commons license.)