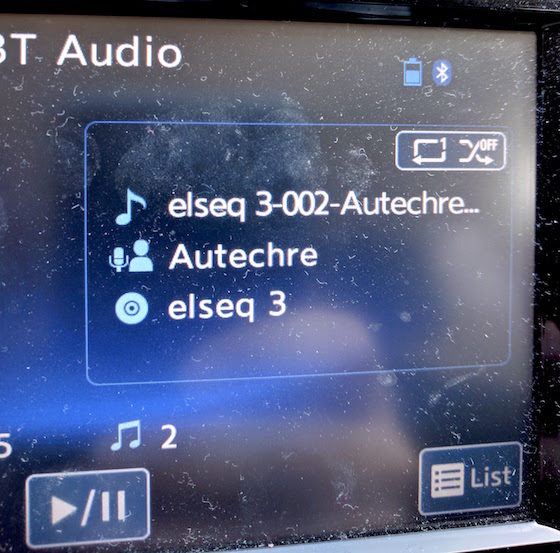 A rare instance yesterday of using Bluetooth to connect my iPod to the car stereo. This is a fairly new thing to me. I was listening to some broken electronic music, a release that was purposefully noisy and that worked hard to maintain the appearance of falling apart — crashing by design, but with the design as sublimated, as indiscernible, as possible. The track identification appeared, a bit magically to me, on the small screen built into the car’s dashboard. There were three line items, one each for the song title, for the artist’s name, and for the album title. Having that information easily accessible at a glance during the drive was pleasant, since the music was quite repetitive, exploring similar themes in nuanced but differing manners over the course of the multiple hours of the recording.

The data was correct, but the icons were humorously out of sync. The icon for track title was a flowery note, the purposeful if generic prettiness of the depiction having nothing to do with what was coming out of the speakers. The icon for the artist showed a human torso next to an especially old-school microphone, the sort associated with Cold War”“era newscasters and Jazz Age singers — despite there being no singing on the album, and despite the sound being certifiably digital. The icon for the album title was a circle, more specifically a circle within a circle within a circle, which meant it could have been intended to signify vinyl or CD or both, but in any case had little to do with download-only release that was actually playing.

The icons didn’t alter what I heard, but then again there’s no such thing as a fully neutral medium. I wondered, as I drove around, what other forms of cultural bias were programmed into that display, what other aesthetic assumptions about entertainment and pleasure were at the root of the network of businesses and technologies that we refer to, in a broad generalization, as the music industry. I wondered why this electronic music I so enjoyed sounded purposefully broken, and whether it felt broken because only something broken could serve as a trenchant critique of — as an icon of dissent in regard to — how the music industry functions.