Listening to Yesterday: The Quiet Meal

When a busy restaurant isn't 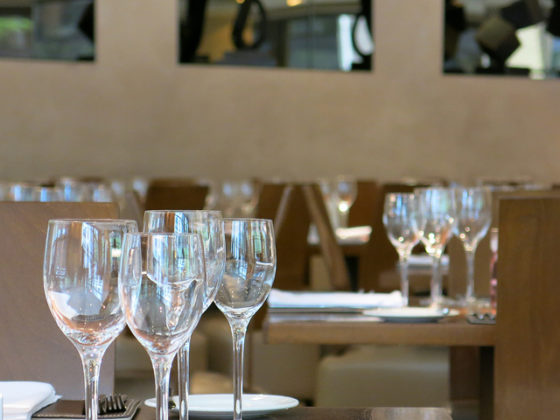 When time came last night to recommend a restaurant, I knew where to go: an Indian place I adore, but that I’m rarely ever remotely near. At the time of meal negotiations, the place was still 20 minutes from where we happened to be, which meant 20 more minutes of stomach growls audible over the sound of a revving car engine.

During the day, especially around lunch time, this place is a revving engine unto itself, a fantastically active machine of food and people and smells — packed with diners, rambunctious with dishes, busy with foot traffic. The restaurant is one long tall room. The cashier is at the far end, across from the entrance. Everyone has to line up at the counter to order and pay for food, which is then delivered to the tables. After you grab a table you wander back to the main counter area to snag dining utensils, napkins, condiments, and water. There’s a large, loud cooler, as well, filled with sodas.

Last night, having raised expectations considerably, with tales of curries, breads, and a wide range of tandoori treats, I welcomed my dinner companion to a nearly empty hall. Just two of the many tables were taken. One person stood at the counter, waiting for patrons — waiting for us. There are many restaurants where silence is a symbol of refinement, of gustatory virtue. This was not such a place. Like the spice of the food, it was at its best when somewhat overwhelming. Instead, yesterday evening, it was initially quite underwhelming.

The food was as good — as great — as always, and after it arrived and we started to eat, any concerns were put quickly aside, but between our entering the establishment and the delivery of the food, the quietude of the place caused a small degree of anxiety on my part. Maybe, for example it was quiet because there had been a change of management and no one ate here anymore. Some peaceful, well-designed restaurants provide privacy; despite the silence, sound doesn’t carry from table to table. In this place, with its high ceiling and tiled floor, the silence felt like a void. Not a vacuum, so much as a desultory cavern. The small talk at the neighboring tables seemed haphazard, and the noise of passing vehicles felt closer than it did during the afternoon — it’s not that you could smell exhaust, but the closeness of the road caused discomfort.

Oddest of all was an absent sound: the kitchen. I’d never noticed during lunch, but during the quiet of dinner I realized that virtually no sounds emanated from the kitchen, so far was it set back, through a tiny little window, from the rest of the room. Of course, as we ate, and talked, and spoke admiringly of the food, our voices helped fill out the room a little. Our chatter, the squeaks of a little boy one table over, a couple that entered soon after, discussing which of their favorites to order — slowly the place filled up, with people and with sound. It never achieved the beautiful chaos of lunchtime, but we all, collectively, through our collegial banter and the noisy activity of eating, breathed some life into the hall, and into each other’s meals.

(Photo by Simon Felton, used via Flickr and a Creative Commons license.)