The peripatetic and admirably curious journalist Alexis Madrigal wandered down to the San Francisco Bay today and came back with audio recordings. The tapes document what occurs as a trio of tugboats, in Madrigal’s description, “drag a huge cargo ship out of its berth.” He subsequently posted two tracks of the audio to his SoundCloud account, one with the “underwater,” or “hydrophonic,” sounds, and the other with the “above water” sounds. He then, via Twitter, offered them up for remixing.

I’ve been fiddling, perchance, these past few days with a new piece of music software called Grainfields. The application is by the sound designer Kasper Fangel Skov, who was born in Texas and lives in Skanderborg, Denmark. Grainfields is a granular synthesizer, which is to say that it allows you to focus on slivers of sound within a given sample and employ them for their varied tonal and rhythmic characteristics. In granular synthesis a fleeting, even microscopic moment can be distended to something “playable.” 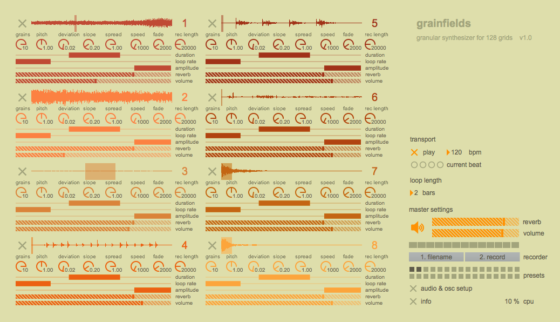 Grainfields was designed for use in Max, the visual programming language developed by Cycling ’74 and named for Max Matthews, the late computer-music pioneer. Grainfields is used in coordination with a Monome, the open-source grid music interface. 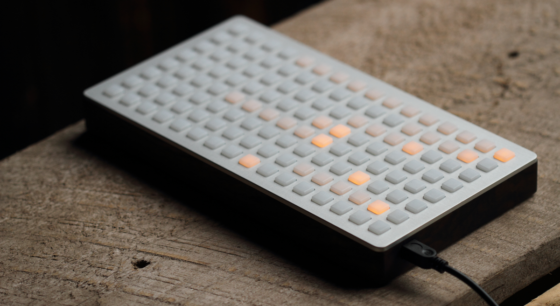 When Grainfields was first released on GitHub, about four days ago, I started with some varied bell recordings from freesound.org, and then sampled some dub techno tracks that I find myself often returning to. This evening I downloaded Madrigal’s pair of field recordings and listened through them (each of the two tracks is just under 21 minutes long), eventually isolating three choice snippets. From the hydrophonic audio I selected one bit that had a rattle quality, and another that was more tonal. Both had a density that spoke of their submerged origin, though they also had the rough texture of something recorded where there was lots of activity. From the above-water track I found a tiny instance of what sounded like a horn. Grainfields allows for eight voices or samples, but in this case I just used those three. Combined they were just under a minute of sound total, the shortest just two seconds in length.

The resulting track, “Tug Tropes,” aims to make something musical from Madrigal’s field recordings. (The title is my nod to Ingram Mashall’s beloved composition “Fog Tropes,” which was based on fog horns recorded in the San Francisco Bay.) The piece moves back and forth for the majority of it between two notes — that is, two grains, two attenuated slivers of the aquatic sounds. What I was trying for was a see-saw quality that was barely a song and had some of the ebb and flow of the water. The other elements come in on occasion, lending some drama, and after the halfway point I begin to nudge to the shriller end of the segment that provided the two main notes. I didn’t change the tuning of any of the source audio, even though Grainfields allows various forms of alteration, including pitch.

Playing field recordings as if they were instruments is one of my favorite musical activities. When you’re out in the world, especially when you’re alone, there can be a symphonic quality to the everyday sounds that are around you. Your brain does something in real time that experiences the audio as if it were music. That experience is reinforced on repeated listen, when the familiarity of a recording hardens the elements that initially were happenstance. With “Tug Tropes” I tried to get at, through the artifice of musical performance, the way everyday sounds can feel like music, how our memories and our human habit of locating — even projecting — patterns can suggest the presence of a composition in the quotidian.

More from Skov and his Grainfields application at kasperskov.dk. He introduced it on the Monome discussion boards, llllllll.co, which is where I first learned about it. More on the Monome at monome.org.