Oberlin’s TIMARA school has exactly one video on its YouTube page, and it was uploaded this past week. What it shows is the early synthesizer the Alles Machine, named for Hal Alles, who built the instrument while at Bell Labs in the 1970s. Computer music pioneer Max Matthews also contributed to the Alles Machine’s development. The video is a performance from 2016 by TIMARA undergraduate Judy Jackson.

The Alles Machine has been in TIMARA’s collection since the early 1980s. This is from a TIMARA blog post on January 30, 2017: “[T]he instrument was donated to the TIMARA Department, although it was barely functioning and lay dormant till recently. TIMARA engineer, John Talbert, has repurposed the machine for future generations of TIMARA composers.” Talbert is one of the half dozen faculty at TIMARA, which stands for Technology in Music and Related Arts, and counts among its alumni the classical critic and composer Kyle Gann, electronic musician Bob Ostertag, and playful digital-media artist Cory Arcangel.

The original deployment of the Alles Machine involved a Digital Equipment Corporation’s LSI-11, a sibling of the PDP-11. An article from a 1983 publication of the International Computer Music Association by Talbert and his TIMARA colleague Gary Nelson describes (see: umich.edu) how Max Matthews visited Oberlin during the 1979-1980 school year, and that led to the TIMARA acquisition of the Alles Machine. Nelson and Talbert traveled to Bell Labs in June 1980: “After several weeks of asking questions and taking notes,” they write, “we gathered up technical documentation, circuit diagrams, and the machine itself and headed back to Ohio to begin a challenging but rewarding period of what the seal of Oberlin College calls ‘learning and labor.'” (And if you want to go wayback, here’s a PDF of the 1979 PDP-11 Processor Handbook.)

It’s unclear when and for how long the Alles was mothballed, presumably decades, but a 2016 document from Talbert, linked to from the TIMARA site, details how the Alles Machine was recently disconnected from the antiquated LSI-11 and now functions thanks to a Mac Mini (“loaded with programs such such as the MPIDE Programming Environment, Max/MSP and Steim’s junXion”). Here’s a shot of the Max/MSP interface: 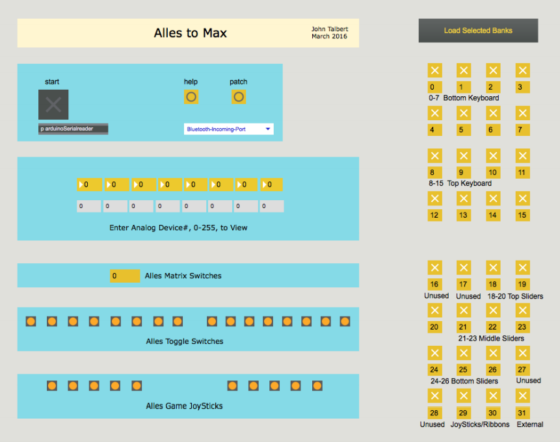 Jackson is a senior at Oberlin, where she is pursuing dual majors, one of them in computer science, the other at TIMARA. Her performance with the refurbished Alles Machine opens with brittle static, the white noise of a failing radio signal from which slowly emerges random, more softly tonal elements, which in turn give way to a warping sing wave. Jackson proceeds to work with these elements, eventually ushering in ever more raucous waveforms. It may be my imagination, but she appears to have opted for an outfit that resembles the one worn by Laurie Spiegel in this widely viewed video of a 1977 Alles Machine performance:

The Judy Jackson performance on the Alles Machine also appears on TIMARA’s Vimeo channel. More on TIMARA at timara.oberlin.edu. More from Jackson at soundcloud.com/judy-jackson118.