Anecdotes appear on the aphextwin.warp.net webstore 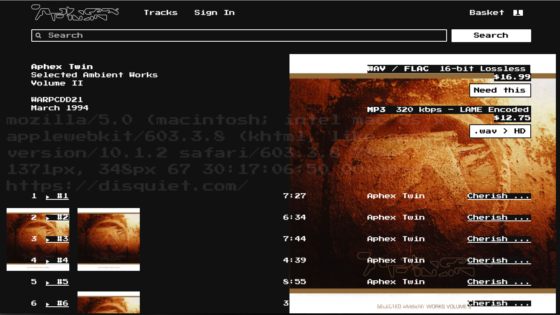 Aphex Twin recently debuted his own online shop, where he’s making available not only high-fidelity audio of past releases, but also candid insights into those recordings. The site is at aphextwin.warp.net. It’s been slowly accumulating his Warp releases, and even music from his own label, Rephlex. The store includes not only recordings released by Richard D. James under the name Aphex Twin, but also under such monikers as GAK, afx, Polygon Window, and the Tuss. And the releases aren’t merely archival. Included is an expanded version of the recent collection of experiments with the Korg Minilogue synth, on whose development James consulted.

In addition to the tracks themselves, streamable online and available for purchased download, there are occasional bits of information. Some of them are simply humorous (a demo for a Japanese extra on 1999’s Windowlicker is tagged “You should not drink and take Antibiotics”), and others more informative, or at least semi-informative (an extra track on 2014’s Syro is tagged “Missing track from Syro, didn’t make it for technical and personal reasons. Drums were made on FOUR customised mid-racked Pearl syncussions, thanks to Colin Fraser and Tony Allgood”).

The site has a mix of certitude and silliness that feels like Richard D. James’ hallmark. For individual tracks you don’t click on a “purchase” or “buy” link, for example; instead you click on a link that reads “Cherish.” On each page, there’s a different joke term for whether you buy the “lossless” or more standard 320 mbps version of an album (these include “No guilty conscience,” “Possess,” “Nab,” “Casket,” and “Part with money,” among others).

The audience for this information is often musicians more than just Aphex Twin listeners. A video was added for the Drukqs track “Vordhosbn,” showing its underlying software in action (the goings-on are detailed by David Abravanelat at cdm.link).

The site didn’t launch fully formed. There was initially a mention that Rephlex releases would show up, and eventually some began to. And it doesn’t appear simply to be a matter of accrual. Things are changing as well. When the site first launched there were little colorful tags next to the new tracks that were being added to various albums. Those extra tracks remain, but the icon callouts are gone.

And, fortunately, among the albums benefitting from liner notes is Selected Ambient Works Volume II, his landmark ambient album, about which I wrote a book in the 33 1/3 series, published in 2014. So far four of the tracks on the record have got little bits of additional info. The full 25 tracks are available for download, rather than the 23 or 24 that plagued discographies for years, but the discography confusion has also been added to, thanks to the appearance of a new, 26th track, an 11-minute-long piece titled “th1 [evnslower].”

Here are the Selected Ambient Works Volume II liner notes that have appeared thus far, and I’ll be keeping an eye out for additions as time passes:

Recorded in Linmiri [Lannerlog bedroom studio], probably the last track I ever recorded in that house, quite fitting really, end of that era. I made it when coming back to visit my parents in Cornwall after moving away to go to college to do a degree in microelectronic engineering, which I thankfully never finished, was so boring, always preferred teaching myself, so much more satisfying, letting your mind wander where it needs to go. I heard Derrick May pressed this up onto vinyl so he could DJ it, I wonder if that was true?

This track has now thankfully been found and uploaded here, I was very worried it had been lost, very relieved*** It was not included on the original CD’s as there wasn’t enough room. I usually always give priority to the vinyl versions of all my releases as I never ever really liked CD’s much, think I would have liked CD’s a little bit more if you could put 90 mins on them, who decided they were to be 74 mins anyway? Thinking about this now I’d love to try and get Warp to do high quality chrome cassette versions of all my Warp musics, maybe even metal ones if possible. If I wait a year or so for this I could include all the extras on the cassettes as there would be plenty of room, would have to sign the tracks over to Warp first for a physical release, something I don’t have to do for this website but that shouldn’t be too difficult.

Someone I used to know, you know who you are, worked as a cleaner in a police station and kindly pinched me a police interview tape. It was with a woman who murdered her husband, it’s the background audio in this track.

featuring an EMS synthi ‘a’, mk1, Studiomaster star mixer, recorded 184 Southgate road, 1st floor, London. Bought the synthi when I was about 19 from Robin wood at ems, Ladock, Cornwall. Saved all my money for it for a long time, one of the first synths I ever bought and I know that machine inside and out, magical piece of equipment, always felt like it was made specially for me.