Sound Tonics: Up for debate in the scientific community is the extent to which listening to audio recordings (or watching videos) of loved ones might alleviate issues for individuals with dementia, per Dr. EO Ijaopo in the latest issue of Translational Psychiatry. … In health-related news, Dutch designer Marcel Wanders is creating a super-quiet (and quite beautiful) violin (shown below) for a friend whose hearing is threatened by her violin playing, per the current issue of Metropolis. I was wondering if it would help to use a MIDI violin, so the audio can be emitted from a speaker across the room, rather than directly into the player’s ear, or to perhaps have a violin where the sound comes out the bottom, so the audience hears it, but again the sound isn’t aimed at the player. 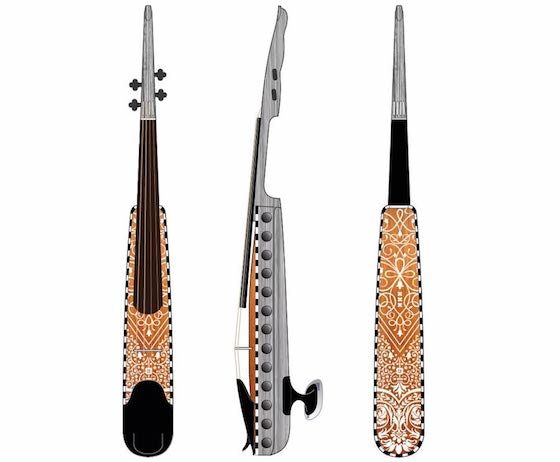 Clam Up: “Oysters can ‘hear’ the ocean even though they don’t have ears,” according to scientists at the University of Bordeaux in France, including Jean-Charles Massabuau, who used accelerometers to gauge the response of test subjects. Oysters appear to be sensitive primarily in the realm of 10 and 200 hertz (humans hear between 20 to 20,000 hertz). One result of this finding is the awareness of a broader range of sea creatures that are potentially impacted by noise pollution.

Music Moods: People’s minds wander less (if I’m reading this correctly) when listening to “happy” music than to “sad” music, according to researchers Liila Taruffi, Corinna Pehrs, Stavros Skouras, and Stefan Koelsch in a paper published this month in Scientific Reports. That’s a short summary for a long and detailed study that’s worth a read. The main takeaway: “In conclusion, we demonstrate that music modulates self-generated thought: During sad (vs. happy) music, listeners direct their attention inwards, engaging in spontaneous thoughts, which are related to the self and emotional aspects of life; during happy (vs. sad) music, listeners are more focused on the music itself and exhibit reduced mind-wandering levels.”

Sonic Weapon (Not): “The New Zealand Defence Force’s explosive ordnance disposal squad was flown to Dunedin by helicopter to carry out a controlled explosion of the cassette tape” — so goes the story of a noise musician named Dene Barnes, 44 whose recording set off a threat alert. More specifically, it was the poem accompanying the album, Street Noise, he released under the name LSD Fundraiser. He seems to be on Bandcamp (at lsdfunraiser.bandcamp.com), but that particular album doesn’t appear to be.

Kid Said, Her Said: Children are, appropriately, protected in the United States during our increasingly electronic age by various FCC regulations. Funny thing about regulations, such as those laid out in the Children’s Online Privacy Protection Act, is they aren’t always future proof. A case in point is how voice assistants function. A computer has to retain a spoken command, even briefly, in order to act on it, as Jon Fingas outlined in a brief Engadget.com story.

Footloose in NYC: “A nearly century-old law that turned New York bars into no-dancing zones, prevented singers like Billie Holiday and Ray Charles from performing and drew protest from Frank Sinatra, is finally set to be struck down,” writes Annie Correal in the New York Times, or as an uncredited Times headline author put it: “After 91 Years, New York Will Let Its People Boogie.” The longstanding law has made it difficult for generations of bar owners and bar-goers to manage the impulse to, you know, dance. (I grew up on Long Island, went to college in the Tri-State Area, and lived in New York City before moving to California, so I know of the hassle that this could be.) Check out this statistic before going on to read the full story: “In New York City, only 97 out of roughly 25,000 eating and drinking establishments have a cabaret license.”

Big Listener: Facebook continues to struggle to convince people it isn’t listening in on conversations, writes Adrianne Jeffries at theoutline.com, citing anecdotes by people who seem to only recall saying things aloud and yet still having them show up in ads served to them on the platform. The strangest related thing that’s ever happened to me was when I was seated, shall we say, in my home’s bathroom and the word “bathroom” briefly appeared — I swear — on my phone’s screen. I imagined the phone’s operating system was somehow mapping my home, and I wondered if the sound of the room might be assisting that effort. Of course, it could all just be a delusion brought on by tech-anxiety.

Text-to-Speechless: In a humorous instance of the unintended consequences of text-to-speech, a New York Times’ reader’s comment to a news story began “Zero optimism that the Democracts …” before wending quickly into peculiar gibberish: “hello hi oh you’re there are you outside,” etc., etc. The commenter eventually returned to the thread and explained, “I was composing a message using the autospeak, and a friend arrived early at my house. I had no idea all that drivel was being recorded.”

Internal Branding: You can soon get a cochlear implant designed specifically to work from its “surgically embedded sound process” in tandem with iOS devices, writes Juli Clover at macrumors.com. Give that my relatively recent generation iPod isn’t allowed to run the latest version of iOS, I wonder what assurance (or insurance) one has regarding upgrades.

Fade Out: I read the obituaries each morning over iced coffee. It’s a simple ritual. Perhaps much ritual is simple by definition? I’ve come to realize that I never copy/paste the names of these newly dead musicians when following up on the day’s obituaries. I always type out their names when searching for particularly informative write-ups, or for examples of their recordings. I use copy/paste all the time, of course, but something about this early-morning obituary ritual has me typing out their (often, to me, unfamiliar) names in full. Perhaps this ritual form of inscription is a gesture of respect. Perhaps it’s a superstition. Perhaps I have difficulty distinguishing between the two. … Deaths of Note: RIP, Hungrarian musician Lajos Som (b. 1947), of the bands Piramis and Neoton Família. … RIP, Daniel Viglietti (b. 1939), Uruguayan singer-songwriter. … RIP, funk musician [Keith Wilder] (68?), of Heatwave. … RIP, Raúl García Zárate (b. 1931); Andean guitarist popularized “Adiós pueblo de Ayacucho.” … RIP, Juliette Cavazzi (b. 1926), “wholesome” Canadian TV figure known simply as Juliette. … RIP, Mike Hudson (61) of the punk rock band the Pagans. … RIP, Fats Domino (b. 1928), a founding father of rock and roll. … RIP, Larry Ray (b. 1954) of the Detroit band Outrageous Cherry. … RIP, Robert Guillaume (b. 1927), TV and film actor, singer (The Lion King, Guys and Dolls). … RIP, Girija Devi (b. 1929), Indian classical singer, “Queen of Thumri.” … RIP, George Young (b. 1946), Easybeats member, “Friday on My Mind” co-writer, AC/DC producer. … RIP, guitarist Scott Putesky aka Daisy Berkowitz (b. 1968), of Marilyn Manson. … RIP, Al Hurricane (b. 1936), “Godfather of New Mexico music.”

This was first published in the October 31, 2017, issue of the free weekly email newsletter This Week in Sound.