This Week in Sound: To Serve and Project 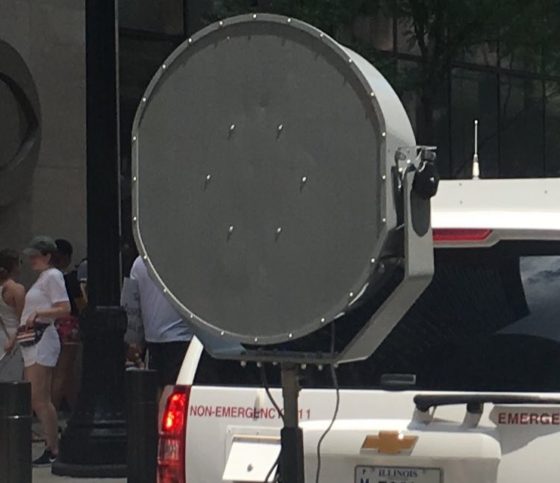 To Serve and Project: The above photograph was posted during the Saturday, June 30, protests in Chicago. The photo is by local sound artist Jeff Kolar, who tweeted it that same day. What is displayed appears to be a sonic weapon — a sonic dispersement tool — being utilized by the Chicago Police Department. People marched across the United States last weekend, in Chicago and other cities around the country. The marches were announced in advance. This wasn’t a mythical flashmob situation. The police, nonetheless, brought out their next-gen apparatuses — to what end remains unclear. Walking in protest hasn’t changed much over the years. You walk, you hold a sign, and there’s a chant — likely rhyming couplets, maybe iambic pentameter. Nonetheless, the technology of the police has been upgraded, and significantly — begging the question, to what end? Perhaps there is no explanation for police interest in the sonic weapon better than this: water cannons make for bad photo opportunities. The sonic weapon may be more effective, but it’s effective largely because its effects are invisible.

Jetless Packs: Late last month I finished reading the recent novel Autonomous by Annalee Newitz, a cofounder of one of the first websites I read every morning, io9.com. The book is packed with crazy not-so-near-future science, like biohacking maker communes, programmable tattoos that move, personal submarines, and sentient robots with human brains in their bellies and nascent sexual-orientation issues on their indentured digital minds, just to name a few of Newitz’s projections. Nonetheless, maybe the most seemingly unlikely (for me) concept was in this sentence, which appeared toward the end of a chapter set in Casablanca: “At last a helicopter skimmed over the mosque toward them, its engines noise-cancelled to the point where all they could hear was the air being beaten with such regularity that it became a long, unending sigh.”   / / /   And then I read the news. The Yomiuri Shimbun reports, “In a bid to achieve the practical use of self-driving flying cars (see below) in the 2020s, the government will establish a public-private council possibly within this year to discuss safety issues, technological development and other matters. … As they will not produce engine noise, noise pollution will also be reduced when they fly over densely populated areas.”   / / /   Meanwhile, NASA is testing “quiet supersonic” aircraft: engadget.com.

Straight Outta Fort Meade: The NSA announced this week that it was deleting a cache of voice data. “Consistent with NSA’s core values of respect for the law, accountability, integrity, and transparency we are making public notice that on May 23, 2018, NSA began deleting all call detail records (CDRs) acquired since 2015 under Title V of the Foreign Intelligence Surveillance Act (FISA),” began an annoucement at nsa.gov. The explanation continued: “NSA is deleting the CDRs because several months ago NSA analysts noted technical irregularities in some data received from telecommunications service providers. These irregularities also resulted in the production to NSA of some CDRs that NSA was not authorized to receive.” (Found via engadget.com.)

“I’m Upset”: A new Drake album that wasn’t named for that goofy white-hat hacker CBS TV show broke the records on Spotify and Apple this week — with the apparent assist, at least on Spotify, of that album popping up in lots of playlists. “Spotify, meanwhile, went even further by inserting into numerous playlists, including unexpected ones like Afternoon Acoustic and Ambient Chill,” writes Jon Finas at engadget.com. (Note: it doesn’t appear to be the case with my Spotify ambient playlist, the Stasis Report.) Now, this isn’t quite on the scale of that one time at Bandcamp — actually, in 2014 via iTunes — when Apple “gave” everyone a new U2 album (wrote Vijith Asar at the time on wired.com, “[T]here’s a very simple reason why this is unprecedented, and that is because it doesn’t make any sense”).   / / /   Still, people are, to borrow the title of one of Drake’s singles, upset, and Jazmine Sleman at crackmagazine.net has instructions on how to get a refund “for excessive Drake promotion.”

Audio Briefs: Additional news. Type Cast: “Some computer scientists turn to voice-command tools to avoid the pain of typing,” writes Anna Nowogrodzki: nature.com   / / /   Tape Heads: There will (finally!) be toys based on the Transformers that hide among us mere humans as mere tape cassettes, rather than as muscle cars: io9.gizmodo.com.   / / /   Habla Overkill: The EFF helped fight back a patent that “essentially covers a language lesson on tape”: eff.org.   / / /   Tome Raider: The rise in audiobook purchases means Amazon, which owns Audible, may have something of a lock on an entire medium: newrepublic.com.

This was first published in the July 5, 2018, issue of the free weekly email newsletter This Week in Sound.