Four new tracks and one Aphex Twin favorite newly added to the ambient playlist on Spotify and Google Play Music as of September 30, 2018 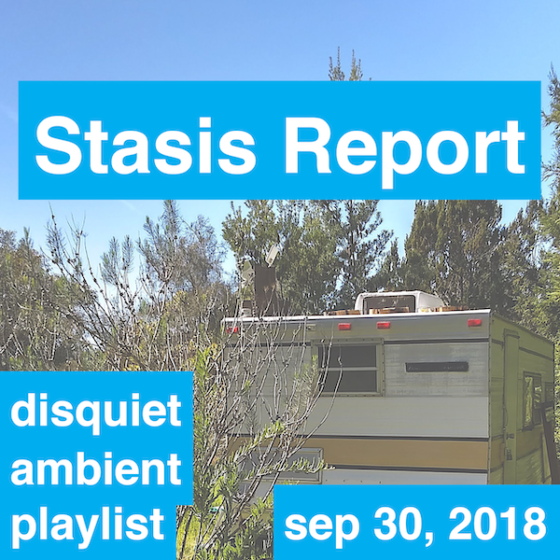 The latest update to my Stasis Report ambient-music playlist, on Spotify and Google Play Music. The following five tracks were added on Sunday, September 30. Four of the tracks are new, and one is a classic from almost a quarter century ago:

✚ “Synth Two” off the new Emily A. Sprague album, Mount Vision: mlesprg.bandcamp.com. I wrote a bit about its title track during its prerelease. (This track wasn’t initially on the Google Play Music version of Stasis Report because the album wasn’t, but eventually it popped up.)

✚ “Through the City,” the track by Marcus Fischer on the new Field Works collaborative album, Pogue’s Run: fieldworks.bandcamp.com.

✚ “Is a Rose Petal of the Dying Crimson Light” off the new Tim Hecker album, Konoyo, on the Kranky label: timhecker.bandcamp.com.

✚ As of this installment of the Stasis Report, I’m going to start introducing one archival track most weeks, starting with “Tree,” the 10th track on Selected Ambient Works Volume 2 from Aphex Twin. The album was originally released in 1994, and is the subject of my 2014 book in the 33 1/3 series: aphextwin.warp.net