Five tracks added to the Spotify and Google Play Music ambient playlist as of November 18, 2018 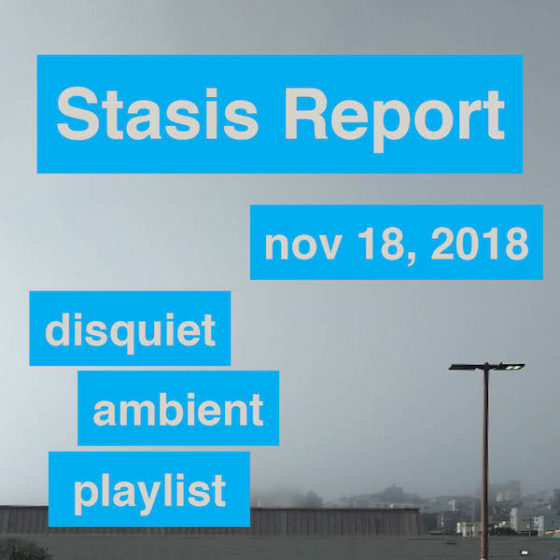 The latest update to my Stasis Report ambient-music playlist on Spotify and Google Play Music. The following five tracks were added on Sunday, November 18.

✚ “Pursuance” by David August, based in Berlin, Germany, off DCXXXIX A.C., released in 2018 on the 99chants label: davidaugust.bandcamp.com.

✚ “Visitation” by Gossamer off Imperishable, a 2018 album (on the Innovative Leisure label) also available in what might be called the Buddha Machine format: a small, battery-operated player with a built-in speaker. Gossamer is Evan Reiner of Los Angeles, California: gossameril.bandcamp.com.

✚ “The Mole Miners” by Inon Zur off the soundtrack to the Fallout 76 video game, released this past week.

✚ “In Absentia” is by Paula Matthusen off the album Matthusen: Pieces for People, released in 2015: innova.mu. A new Matthusen album, Between Systems and Grounds, a collaboration with Olivia Valentine, is due out on November 30 on the Carrier Records label: betweensystemsandgrounds.com.

✚ “Nanou 2” by Aphex Twin off his 2001 album, Drukqs on the Warp label. The song appears on the soundtrack to the new film Beautiful Boy, directed by Felix Van Groeningen.

Some previous Stasis Report tracks were removed to make room for these, keeping the playlist length to roughly two hours. Those retired tracks — from Laraaji, r beny, and the duo of William Basinski and Lawrence English — are now in the Stasis Archives playlist (currently only on Spotify).