The Walls of Solomon’s Delicatessen 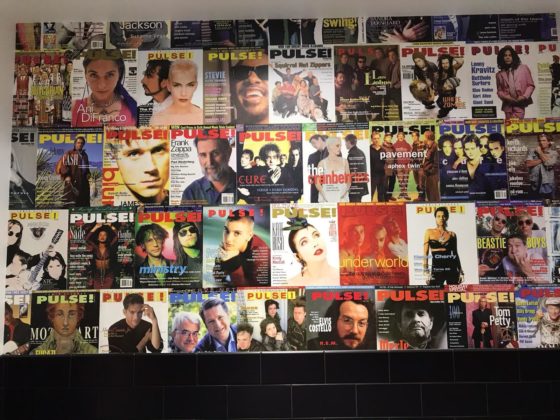 There’s now a Solomon’s Delicatessen in Davis, California, named in honor of Russ Solomon, the legendary founder of Tower Records. I was an editor on Tower’s magazines — Pulse!; Classical Pulse!, which I co-founded with the opera critic Robert Levine; and epulse, the email newsletter that I founded in the paleolithic days of 1994 and that ran for a decade — from 1989 to 1996, and then continued in a freelance capacity until 2004, when it all came to an end in the company’s bankruptcy. A friend texted me this afternoon from the deli with this photo (also on his Instagram account) of the wall, which is plastered with old Pulse! covers, many of which stories I wrote (White Zombie, among them), and many more of which I edited (that Ministry one, for example, written by the great science fiction novelist Richard Kadrey). I’m pretty sure the Aphex Twin story listed on the Pavement cover is the one I did that decades later led to my 33 1/3 book on Selected Ambient Works Volume 2, but I’ll have to look back, as I don’t recall which issue it was.