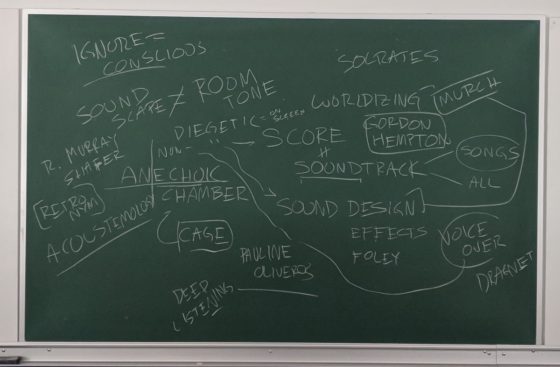 The course I teach each spring, “Sound of Brands,” passed an early milestone this past Wednesday, February 27. Our fourth weekly class meeting, it marked the end of the first major arc of the syllabus and the start of the second arc.

This Wednesday began the second arc, which is the core of the curriculum, the six-week stint (out of fifteen three-hour sessions total) from which the course takes its name: “Sounds of Brands.” In this arc we explore how things use sound to express themselves in the media landscape. We’ve already looked, to date, at film and television, and a bit at video games, but now we’re looking at products and services and corporations and so forth. (I use the word “brands” because it provides a broad stroke. That said, I do suggest that if the word “company” works fine in a given situation, then please say “company” instead of “brand.” There’s something uncomfortably anthropomorphic about the term “brand,” and something narcissistic to that particular anthropomorphism. When it’s useful and necessary, use it, certainly. When it’s not, don’t feed the beast.)

To make that shift from the first arc of the course to the second, we paused at the start of class Wednesday to reflect back on concepts we worked through during the first three weeks. This blackboard displays what accumulated during about 45 minutes of discussion that I led. Looking at it now, I realize it’s essentially three things: a lot of neat ideas, and a bunch of super-accomplished thinkers, and Dragnet. The board was getting packed and we needed to shift to the new material, so I should mention one additional concept that should have been on there: “sound design as score,” the TV series Southland, associated with it, much as Dragnet is here associated with “voice over,” which in turn is associated with “non-diegetic.”

I just want to note some issues with characterizing “voice over” as expressly non-diegetic. I think the diegetic/non-diegetic pairing, while useful, suggests a binary when there’s really more of a continuum. There’s an argument to be made that voice overs are sometimes expressions of thought of a character who is part of the story, not an omniscient narrator, and that thought is sometimes concurrent with what is on screen, and that what is on screen is sometimes out of sync with everyday conceptions of time.

In any case, with that over, we moved on to the origins of the jingle. I’m not doing a week-by-week online summary of the course here this semester, but I am mentioning material on Twitter, and will likely do a few more focused write-ups in the coming months.

Oh, and yes, the classroom I’m teaching in this semester does have an actual blackboard, and I am filthy with white dust at the end of each session. There’s a pencil sharpener hanging on the wall, too.