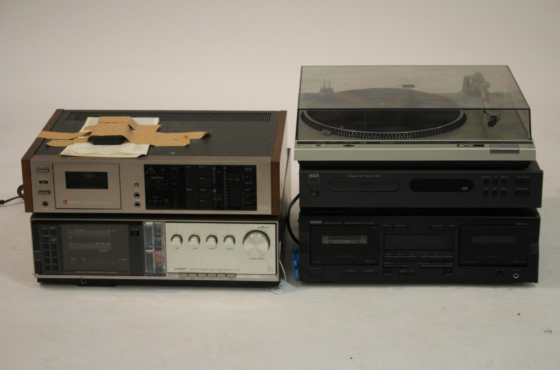 Items from the estate of the late novelist Philip Roth (Portnoy’s Complaint, American Pastoral) are now up for auction. Among the household possessions: Roth’s stereo system, a fairly mundane assortment of aged components, pictured above.

Look closely at the image. I do wonder what the three apparent cassette players, a single deck on the left and a dual on the right, were for. A friend pointed them out when I shared the image elsewhere. I imagine Roth recorded himself telling his stories, and then used the system to dub copies for the transcription process. (I also like to imagine he was making generative tape loop compositions with Mia Farrow for the score to a Rosemary’s Baby sequel. A reader can dream.)

I found the Roth item via a brief rant in the Guardian that focused on its author’s deeply felt antipathy for “literary fetishists,” antipathy that didn’t manage to muster 300 words. I get the concern. I’ve killed my heroes several times over, but I also imagine that if Roth’s stereo were later found in a thrift store or garbage heap, there would have been 1,000 words to the contrary. I’m not sure what the best option is, but waiting over a year and then holding an online auction seems OK. Starting bid: $150.

This is lightly adapted from the July 14, 2019, issue of the free weekly Disquiet.com email newsletter This Week in Sound.