Before and After Language

Highlights of LACMA's exhibit Beyond Line: The Art of Korean Writing 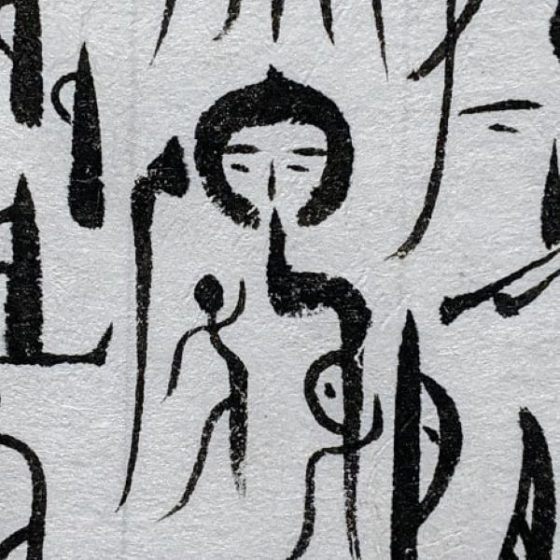 The above image is a detail from a contemporary piece of calligraphy by artist Kim Jongweon, who is working toward a new visual vocabulary born of ancient and modern Korean writing. Until dissuaded, I’m going to believe this character (in both the sense of a written character, and of an image depicting a human face) is playing some sort of woodwind, or perhaps is singing. Note the smaller, inset figure. It appears to be dancing. Also shown, below, for context is a photo of the full Jongweon piece, currently displayed as part of Beyond Line: The Art of Korean Writing, a large-scale exhibit at the Los Angeles County Museum of Art. That one little dancer is but a filigree amid this expanse of orderly, buoyant drawings: 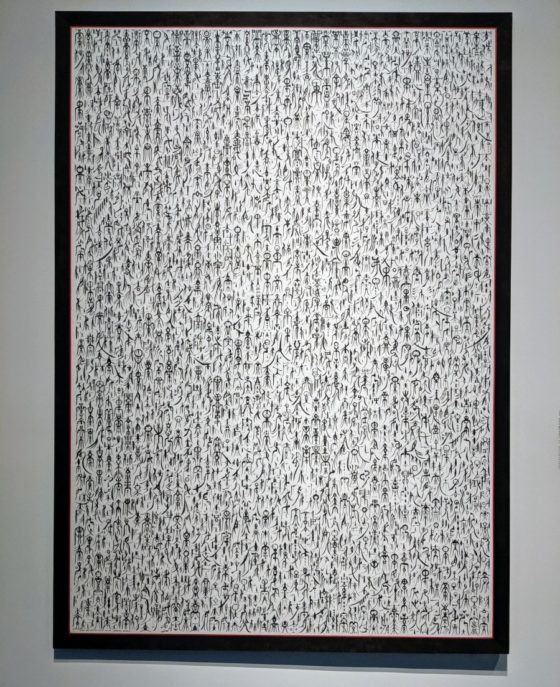 The exhibit is phenomenal, massive walls given over to single characters the size of a human body, glass cabinets with fine ancient texts, and rubbings of even older examples of Koreans expressing themselves with lines, lines that some day would evolve into writing, into an expression of voice as much as of thought. Try, for example, returning the gaze of a 7,000-year old face as seen in this petroglyph. I’m fascinated by the absence of ears. Is this how someone saw themselves? Is it a drawing of a mask? Stare back in time and time stares back at you:

A focus of the exhibit is hangeul, a modernized and simplified Korean lettering, or “phonetic script,” that dates back to the 15th century. It was developed in order to replace the classical Chinese that had long been the region’s lingua franca. (That’s not actually an accurate description. As a This Week in Sound reader, Anne Bell, helpfully clarified for me, via email: “The Korean language has always been distinct from Chinese but the elite used classical Chinese characters as the writing system for centuries. What hangeul did was mimic the actual sounds of spoken Korean, making it a true phonetic alphabet. The hangeul alphabet has 28 letters. Compare this to Chinese where basic literacy requires learning between 2500 to 3000 characters. This was huge in terms of democratizing the written word.”) I’ve always marveled at the pleasing geometry of the Korean language, and this exhibit brings it alive in a way I had long dreamed of. Look at these bold letter forms and ponder that this was published in 1446. 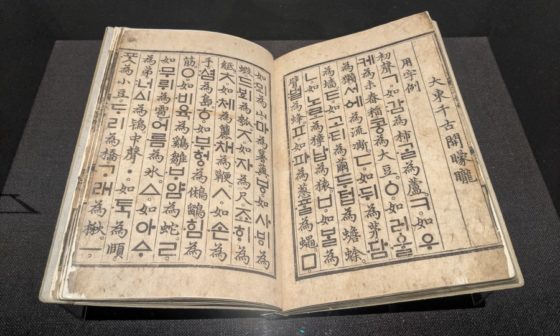 At times in the exhibit the connection between line and tongue is made explicit, as in this 1947 document (almost exactly 600 years later than the above book), which explains how “mouth movements” match various aspects of hangeul: 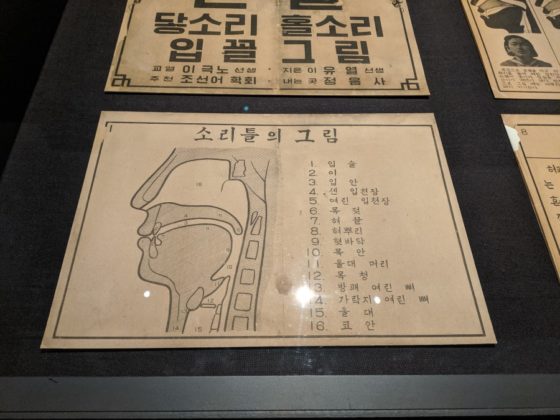 More on the exhibit at the museum’s website, which explains that due to how rare many of the displayed pieces are, the show will not be touring: lacma.org.

This is lightly adapted and expanded from an edition first published in the August 26, 2019, issue of the free Disquiet.com weekly email newsletter This Week in Sound (tinyletter.com/disquiet).