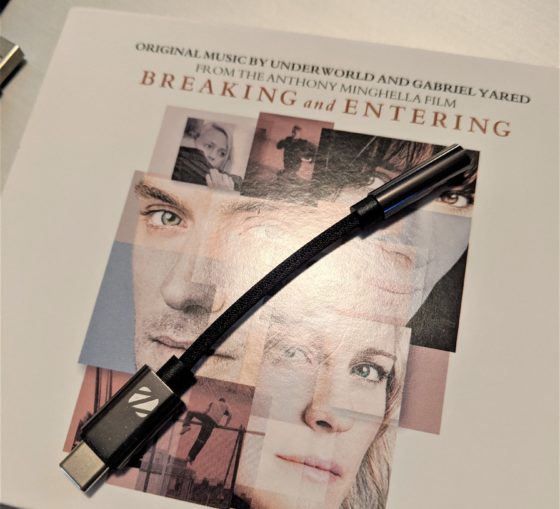 Two blasts from the media past in one day: a CD and a dongle.

(1) I purchased a CD of the score to Breaking and Entering, the Anthony Minghella film, on eBay because the music isn’t on Google Play Music (which I subscribe to), or on Spotify, or on any equivalent I’ve found. I’m a big admirer of Underworld and of Gabriel Yared (all the way back to Betty Blue), and after listening to rips of the Breaking and Entering tracks on YouTube I wanted to be able to listen to it in full. This is from 2006, the year before Underworld scored Sunshine for Danny Boyle, who a decade earlier had helped inculcate them into the vocabulary of film with Trainspotting (true, “Cowgirl” was in Hackers the year prior).

The Breaking and Entering CD arrived still wrapped in its original prophylactic cellophane, affixed with a price tag of nearly $14, or more than twice what I had paid, including shipping, to some semi-anonymous eBay “store” (aka someone with a packed closet or garage across the country from me).

The CD came with a 12-page booklet containing a lengthy essay by Minghella about the role of music in his creative process (it opens: “I find it very difficult to write the screenplay for a film I’m directing until I can hear what the film might sound like”), and about how he brought Underworld together with Yared, much as earlier Minghella films had led to other pairings for Yared (with trumpeter Guy Barker for The Talented Mister Ripley and T-Bone Burnett for Cold Mountain, not to mention the role Marta Sebestyen’s voice played in The English Patient).

Were Breaking and Entering on a streaming service, none of this material would likely have been present (the essay’s length would push the norms even of Bandcamp), nor the detailed credits, including an attribution to Martin Cantwell for “Atmospheres,” which I’m a bit desperate to know more about. Currently Google has all of seven returns in a search for “‘Martin Cantwell’ atmospheres ‘breaking and entering'” and it will have eight as soon as I hit publish on this post. (There are more returns for a random subtitle from a TV show I mentioned in my previous post.)

If the universal-jukebox promise of streaming services and Google searches had already failed me, trying to rip the CD to my computer’s hard drive was another reminder of the gaps that technology inserts into our knowledge. A service did manage to populate the tracks’ titles, but in the process listed Underworld as “artists” and Yared as “composer,” which has no basis in reality, as Minghella himself recounted. He joked they became a fully collaborative trio: “Undergab” or “YaredWorld.”

(2) The other item is a little converter dongle that will let my jack-less mobile phone (currently an Android Pixel 2 XL, though users of iPhones and other devices know the same pain) use cabled headphones. “Cabled headphones” is a retronym, in light of the rise of the Bluetooth variety. Bluetooth has its uses, but the fact is that at some point during a long day, my earbuds’ batteries are likely to run out. Also, I have a really nice pair of cabled headphones at home.