From his 2014 book, Bumping into a Chair While Humming 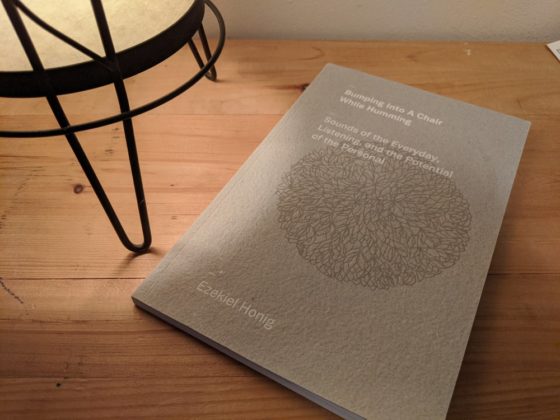 Finished reading the book Bumping into a Chair While Humming: Sounds of the Everyday, Listening, and the Potential of the Personal, a slim yet rangy 2014 collection of thoughts by the musician Ezekiel Honig. Honig is based in New York City. I bought the book from someone in Boston, only to find that a friend here in San Francisco printed the letterpress cover. It’s a small world.

It’s also a world filled with sonic potential. The way that everyday sounds can become raw material for music is the subject of Honig’s book. The title uses the experience of knocking into something physical, such as a chair, for the happy accident of being struck by sound in a way that registers with you personally. The book is written with musicians in mind, but the concepts are more broadly applicable and accessible. Four things stuck with me on an initial read:

Side note: I occasionally misplaced the book while reading it because it has no print on the spine. I realized I have several books with blank spines. I rounded up a few and I’ll start keeping them in one spot on my shelf. Right now this includes, along with Honig’s book, two exhibit catalogs: Bill Beckley: An Accidental Poet (1968) and Sound: An Exhibition of Sound Sculpture, Instrument Building, and Acoustically Tuned Space.

More on the book at ezekielhonig.com. The physical edition was limited to 300 (I got number 101), but helpfully there’s an ebook version, too.