Listening to The Jericho Mile 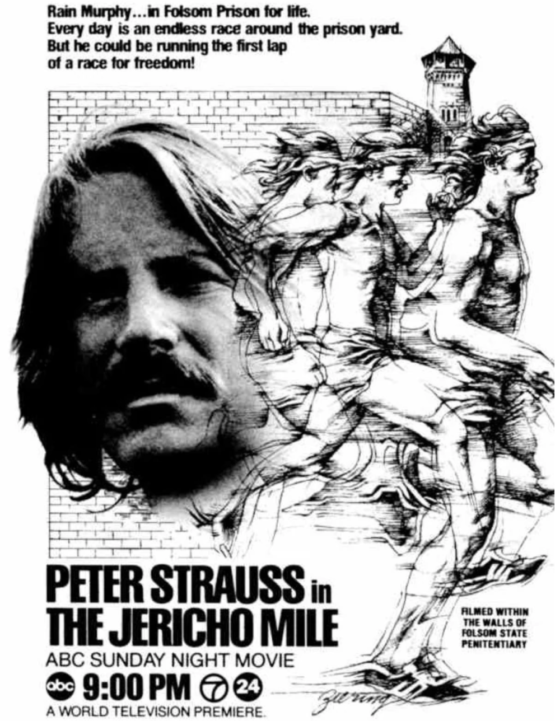 I thought I’d seen every Michael Mann movie but I’d never seen The Jericho Mile (1979), which he directed even before Thief (1981), his first film for theatrical release. The Jericho Mile is an ABC TV movie about a prisoner at Folsom with a gift for running. Peter Strauss stars, and the cast includes Richard Lawson, Brian Dennehy, and Geoffrey Lewis, as well as, apparently, numerous actual Folsom residents at the time of the movie’s filming.

This week I finally got around to watching it. The Jericho Mile has, already, a lot of the classic Mann themes (later on view in such films as Heat and Collateral), including the unwritten rules of the criminal underclass, and a view of the subculture from the perspective of a charismatic outlier. It’s not packed with music the way later Mann productions would be. There is, though, great use of a cover of the Rolling Stones’ “Sympathy for the Devil”; a looser version with no vocals hits the sweet spot between pop and score. The opening montage is a virtual trial run for Miami Vice, everything in sync with the music, even inmates doing jumping jacks.

There were a few other sonic moments worth mentioning:

(1) Midway through, following a riot, there’s a fade-to-white that aligns perfectly with the slowing of the prison’s manual siren.

(2) There’s a minor but unmistakable character in the form of an inmate with a boombox. The role is a bit underdeveloped, but it does allow for diegetic blurring, Mann leaving it unclear at times if what we hear is the score or an emanation from the speakers.

(3) And then there’s the final race, which alternates segments of huffing and puffing with serene silence, the latter presenting the runner’s psychological escape from the prison system, and arguably from the whole of society. This utilization of silence at the end of The Jericho Mile is powerful. It gets at the false dichotomy between diegetic (in-narrative) and non-diegetic (off-screen, such as score or voice-over) sound. What the director has prioritized is representing the point of view, the experience, of the character.

I wrote a short study of Thief, Mann’s subsequent film, last year for Hilobrow.com, and in the interest of time, I avoided the temptation to revisit other past Mann works. I think I’m going to revisit some more soon, including Straight Time and perhaps the Mann film I appreciated the least when I first saw it: The Last of the Mohicans.