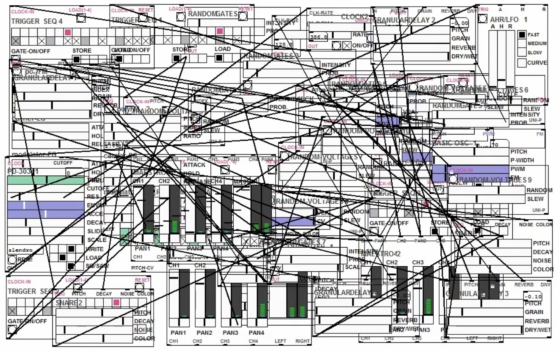 There is a tradition of graphic notation, in which images are read as musical scores, whether or not that’s actually the intended case of the original source — contrast, for example, the beautiful designs of an Iannis Xenakis’ orchestration (below) with the found scores of Christian Marclay (further below). 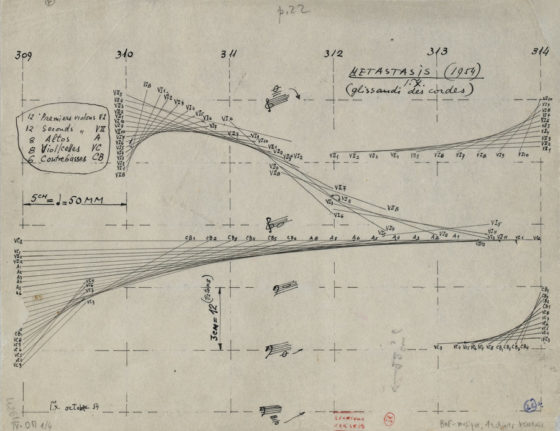 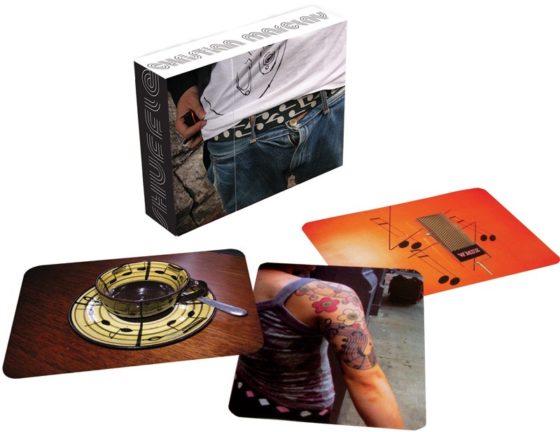 There is, as well, the growing range of software tools that are, in effect, visual programming languages for sound. They allow the user/composer/coder to create systems — virtual instruments — that then emit audio both planned and discovered, intended and by chance.

In turn, when an implementation of a visual programming language reaches a certain synchrony with the music it produces, the visual can be said to serve double duty: both as virtual instrument and, in effect, as graphically notated score.

This is certainly the case with the vibrant hodge podge, shown up at the top of this post, that constitutes “Generative Music with Modular Synth in Pure Data,” by musician Fahmi Mursyid. As its title suggests, it’s a generative piece (one that produces music that might differ over time) in Pure Data (a programming language originated by Miller Puckette). Listen and watch here (and if you are a Patreon supporter of Mursyid’s, the original post for the track on YouTube includes a link to the Pure Data patch, which you can download, listen to in real time, and tweak as you like).

More on Pure Data at puredata.info. More from Fahmi Mursyid, who is based in Indonesia, at ideologikal.bandcamp.com. (I don’t usually write about the same musician twice in a week, but this piece is quite different from the feedback drone of Mursyid’s I wrote about on Tuesday.)