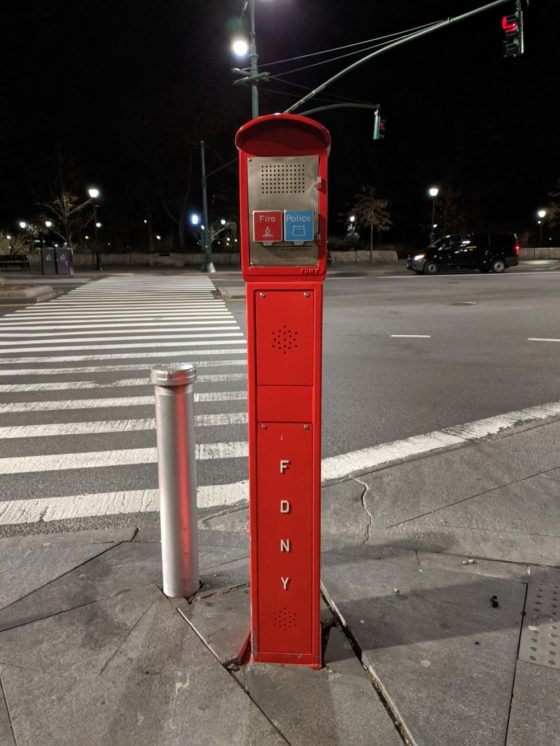 Toward the southern tip of Manhattan stands an antiquated beacon of security. In ramrod posture and bright red coloration, not to mention old-fashioned charm, it brings to mind one of the Queen’s Guard: stoic, efficient, resolute in its dedication to duty. There are identical models across the city. This location, near Battery Park, is walking distance from Ground Zero of the 9/11 attacks.

The device is an alert system for the twinned fire and police departments of New York City. The two departments are represented with red and blue buttons, though the light shade of the police one, combined with the fact almost the entire thing is otherwise red, tells you this is first and foremost Fire Department property. That’s even before you might notice the vertical FDNY initials toward its base — and, in a more subtle treatment, horizontally just below what might be characterized as the device’s head.

That slight bulge at the top, an anthropomorphic gesture, seems like a premonition of robot beacons from the future. Should the streets of New York be served and protected by the city’s bravest androids decades from now, the automatons might bear some distant resemblance to this ancestral stationary signal box. The result would be a Buckingham Palace guard through the lens of an Osamu Tezuka manga.

Today, beneath the brim of what would be the beacon’s hat, there sits a puncture grid: seven stark horizontal rows of eleven holes each. Across town in some file cabinet there’s likely a rejected design in which the Fire/Police buttons sit like eyes above the grid. The grid, here a combination of eyes, nose, and mouth, signals the presence of an audio system — a hybrid speaker/microphone, allowing the bystander to “report an emergency,” as the beacon’s limited textual information instructs.

There are two other puncture grids on the Battery Park beacon, one midway down its torso, and the other at its very base (presumably for someone who hits the pavement after triggering one of the communication channels). Both are in the unmistakable shape of the classic sheriff badge. While the beacon is the figure of law-enforcement authority, the badges are likely both microphone and speaker. The message seems to be that once you engage with the beacon to send an alert, you have yourself, in effect, been deputized.