The Last Concert I Saw Live in Person

Back in late January

In retrospect, various factors show how my preparation for the current health crisis began earlier than I was fully conscious of. I think the most recent live performance I attended may have been way back on January 30, 2020, at the Luggage Store, here in San Francisco, where the weekly series occurs each Thursday night. Well, did happen, before all live in-person concerts stopped happening. (Two days later I posted a photo of the graffiti-covered stairwell at the Luggage Store, which is an art gallery, not a luggage store.) I was due to attend several other shows after that, and bowed out, most recently on March 7, judging by my calendar. Along the lines of my “last night” experience in Manhattan a week prior, that’s another moment when things seemed to speed up — in this case, to cascade. Barely 48 hours later, the following Monday, March 9, all classes at the school where I teach once a year were announced to be transitioning online, and well before the end of the work week the local public school district had done the same. 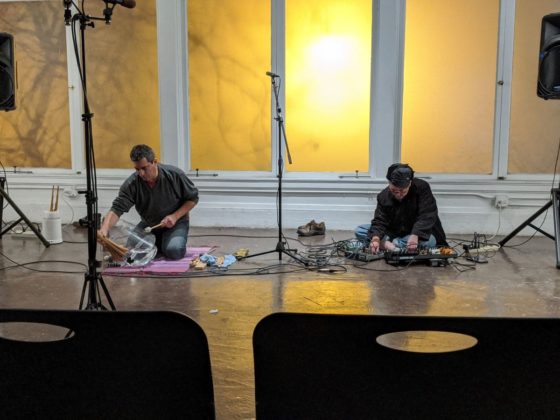 And so, these are two shots from the last time I saw music live in the flesh. That’s the duo Mit Darm (Edward Shocker, left, and Suki O’Kane), and sharing the bill with them were Steve Adams, left, and John Hanes. I’d sat next to O’Kane one evening at the most recent San Francisco Tape Music Festival, and was looking forward to hearing her perform. Adams is a member of the Rova Saxophone Quartet, of whom I’m a longtime admirer. I was excited to hear what he was up to when he put his sax aside in favor of a laptop. 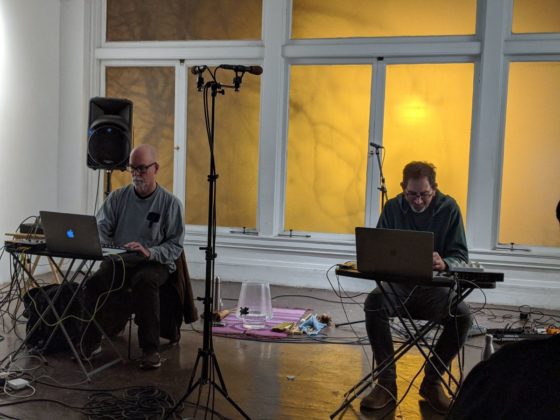 After the Luggage Store show was over, I started to head home, and passed, barely a block away, the Center for New Music, where another Rova member, Jon Raskin, had just finished a separate performance. Such nights, where lives and artistic pursuits overlap and intersect on the street and in venues, are on hold for an extended moment. And for the moment, live performances are flourishing online. I’m hopeful, for the musicians’ sake, that virtual attendees are putting some money in the tip jars, and signing up for online shows where there’s a proper ticket fee.

Speaking of which, I noticed something this morning at bayimproviser.com, an excellent concert listing service that has been essentially my local social calendar for as long as I can remember. It’s one of a few dozen sites I have bookmarked to look at each morning over coffee. For weeks, it had become a list of cancelled and postponed performances, but that seems to have changed, at least a little. Now it’s also listing some live online events by local musicians. I had been depressed each morning seeing all the non-events, and now look forward to what starts popping up.