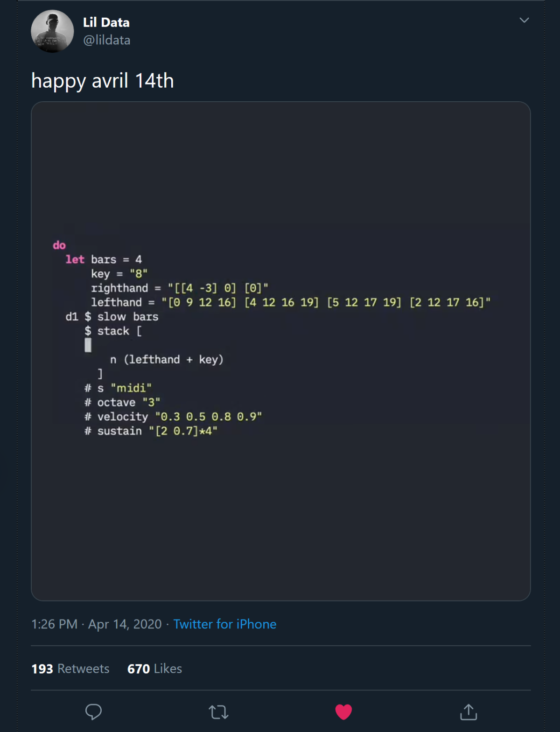 It’s April 14, which is just another day on the calendar, unless you’re an Aphex Twin fan. If you’re an Aphex Twin fan, then today is like your other favorite holiday, and your birthday, and an idealized version of Record Store Day all wrapped up in one. It’s the day when musicians celebrate the Aphex Twin song that takes its name from this date, “Avril 14th” (off the 2001 album Drukqs), and do their thing to and with it. Today there were numerous versions, as always, but the one that stole my heart was this live-coding version by Lil Data, who committed it in the open-source language TidalCycles. Screenshot above. Click through to Lil Data’s Instagram or Twitter accounts to witness it in all its monospace beauty as Lil Data brings the song to life one typed character at a time. “Avril 14th” is a solo piano piece, and it’s always a pleasure to watch the attention performers pay to it, such as Josh Cohen, whose YouTube video has racked up well over 300,000 views since it debuted in January 2017, and Kelly Moran (a Warp labelmate of Aphex Twin’s), who posted a version to Twitter today. But watching as Lil Data trades a piano keyboard for a computer one is next level. And in the opens-source spirit of the software, Lil Data posted the code-cum-transcription on GitHub. More on TidalCycles at tidalcycles.org. In the days leading up to April/Avril 14, Aphex Twin rebooted his soundcloud.com/user18081971 account (the seemingly generic name is, in fact, his birthday, August 18, 1971) and began posting new music, including a beautiful ambient piece, “qu1”:

Major thanks to twitter.com/rbxbex for having hipped me to Lil Data.