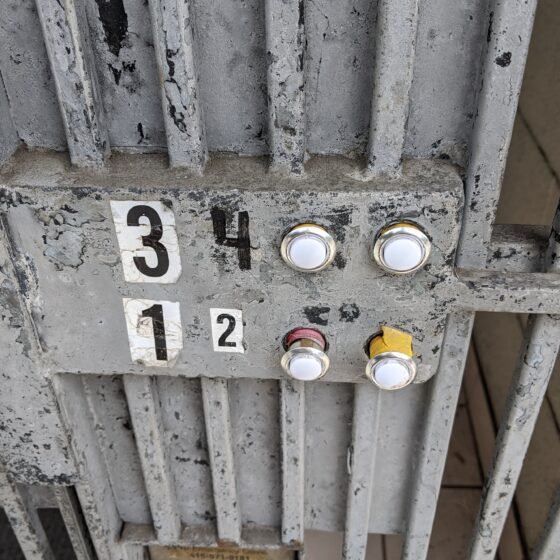 By definition, a doorbell is a three-dimensional object, four dimensions if you count the sound of that bell ringing as it is experienced over time. To press a doorbell is to push, to exert some amount of pressure — to, in effect, prematurely enter the premises, if only by a millimeter or two. Still, in most cases, a doorbell presents an effectively flat visage, two dimensions, generally white and circular. Even as time passes and the doorbell falls — almost inevitably, at least in urban settings — into disrepair, that flatness is its natural mechanical state. But sometimes the third dimension has a means of making itself felt. Putting aside the readymade punk-rock-flyer quality of the dwellings’ numbers, the buttons on this doorbell are situated at a variety of elevations. This is due to damage over time and subsequent attempts to address the damage, not some sort of experimental next-level user-interface design. Apartments 1 and 2 are truly distended, the color-coded red and yellow tape seemingly providing some sort of support to the mechanisms. (The yellow appears to be consistent with the makeup of the two buttons on the top row, suggesting the red tape is an after-market DIY fix-it attempt.) Even apartment 4 is further out than the baseline depth provided by apartment 3. I usually shoot doorbells straight on, but this one required an angle and some elevation to be faithfully represented.