There’s a new feature on Soundcloud, the prominent audio streaming and distribution service. Listeners have long been able to “repost” tracks by other users. Now when reposting, they can add a comment. The length is up to 140 characters, same as an old-school tweet, which seems like an esoteric choice, but so be it. Context is always better.

This upgrade correlates with Bandcamp’s long-running feature that let’s a purchaser of a release choose a track and comment on it. Those comments selectively appear on the webpage for the release: 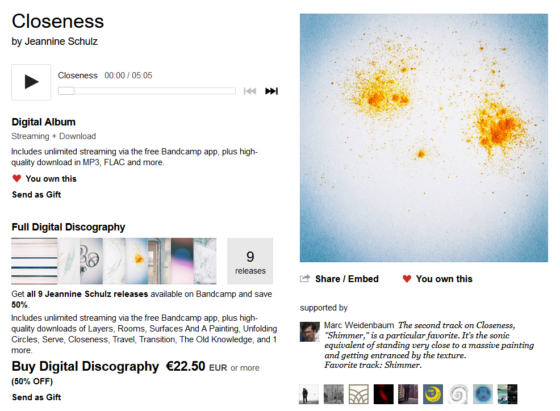 This expansion of the repost feature may be a sign that SoundCloud is re-emphasizing /stream, which shows things have been posted (or reposted) by accounts you follow, in simple, reverse-chronological order. If so, it’d be nice to have a toggle option for reposts, because they can clog up /stream. I’ve unfollowed some repost-heavy accounts.

In addition, SoundCloud has grown over the years. What hasn’t grown is the number of accounts you can follow. The number remains capped at 2,000, which is low. SoundCloud also provides no practical tools to efficiently cull the accounts you do follow (like, say, see who hasn’t posted in x number of years). Any time I want to add a new account (I follow 2,000, and am followed by five times that number), I have to first delete one.

All things said, I do hope people take advantage of the new comment option for reposts of tracks on SoundCloud, to provide some framing context for why they’ve reposted. I also hope the new feature leads some repost-happy accounts to chill out a bit.

Postscript: When I first posted this, I neglected to link to the track depicted up top in the screenshot detail. It is “Fog” by Abstract Machines (aka Andrzej Koper of Wroclaw, Poland): soundcloud.com/abstract-machines.