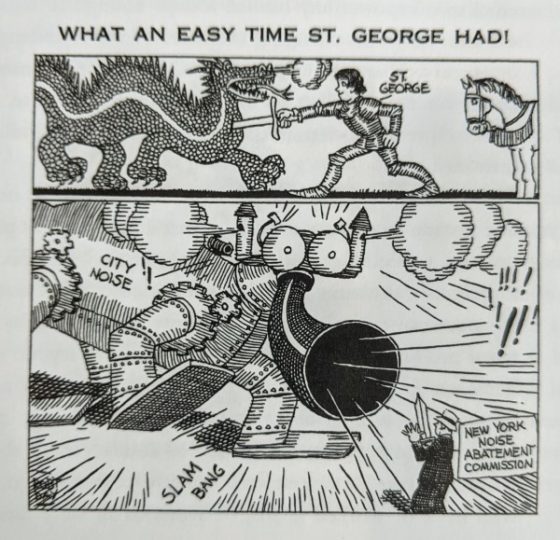 I’ve been rereading Emily Thompson’s The Soundscape of Modernity for the first time since it was published, nearly 20 years ago, back in 2002. Each page is a trove of historical detail, such as the above 1930 Robert Day editorial cartoon. The next year The New Yorker would start publishing Day, and it would do so through 1976.

For all the advancement of our comprehension culturally of sound, it’s not like the early 1900s were the stone age. As Thompson tells us, the New York Times noted in 1926 that volume wasn’t the issue; “the nature of the [specific] sounds were.” That’s a distinction many today, in our over-quantified era, still find to be a revelation. Around that same time, for example, it was shown that “horse-drawn traffic was actually louder than automobiles or trucks,” even though modern vehicles were generally the source of citizen complaints (per Edward Elway Free, using a “Western Electric audiometer”).

At the turn of the century, back in 1905, Julia Barnett Rice “counted almost 3,000 whistles [of tugboats] in just one night,” leading two years later to the Bennett Act. Of course, once noise laws were set, matters of race and class came into play as to what was and wasn’t criminal. Thompson lays this all out in her excellent book.

Here’s another editorial cartoon reproduced in The Soundscape of Modernity. It’s from the same year, 1930: 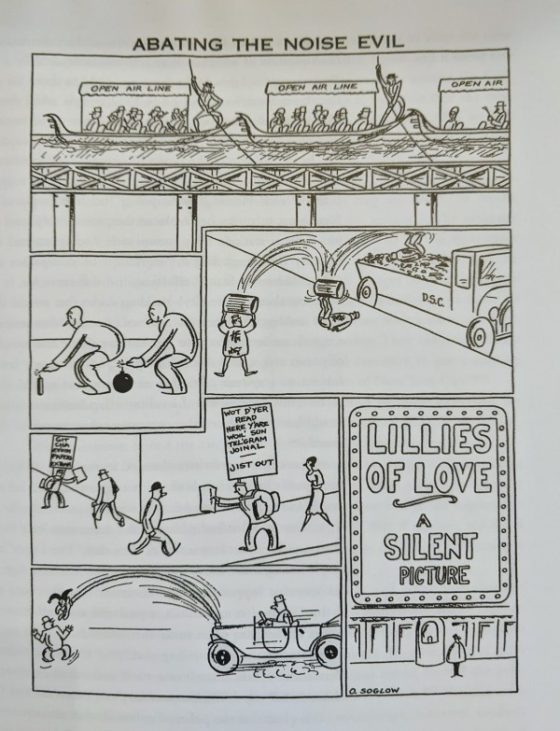 The New Yorker published the piece by Otto Soglow: waterway gondolas replacing elevated trains, a louder firework to punish someone setting off a firework, a jack-in-the-box replacing a car horn. I immediately got the silent newspaper hawkers in the Soglow. Unclear to me was the garbage truck joke, which friends later helped me understand: gymnasts making quick, quiet work of the pails.

The silent picture joke still confuses me, all the more so because being the final panel, it serves as the punch line of a series of punch lines. This is the joke he chose to end on, and I understand it the least. Silent movies weren’t really silent. We just call them that. They had scores. Projectors were loud. They were often raucously attended. Perhaps the appearance in Soglow’s strip was a matter of instant nostalgia. Perhaps three years after The Jazz Singer, people were already regretting the talkie. Or perhaps the point is the lonely theater employee below the marquee: you could happily attend a silent movie in 1930 because the crowds were elsewhere.