The Assignment: Play a tune by yourself and as if by two people whom you invent. 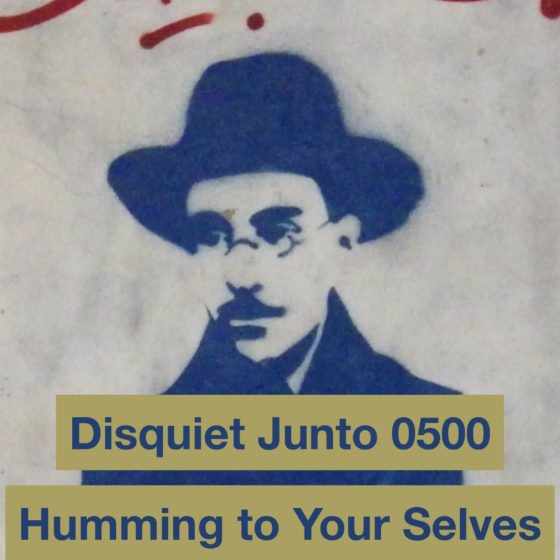 Disquiet Junto Project 500: Humming to Your Selves The Assignment: Play a tune by yourself and as if by two people whom you invent.

It was Kamen Nedev of Madrid, Spain, who suggested via Twitter that after all this time we do a proper Disquiet Junto project inspired by the late poet Fernando Pessoa (1888-1935).

Step 1: Create two alternate identities, people other than yourself. Each of these two people should be musicians, and they should be strikingly different from you and from each other.

Step 2: For each of the two people you invented in Step 1, fill in their background. Think about where are they from, what are their interests, what sort of music do they make?

Additional Background: This week’s project is inspired by the work of Fernando Pessoa. You don’t need to know much about him to participate, thought it’s highly recommended that in the future you learn more about his writing and his legacy. A key thing to understand about Pessoa is his concept of the “heteronym.” Pessoa wrote from numerous points of view, and for each he developed a unique persona. These were, as Richard Zenith writes in his new biography of Pessoa, more than pseudonyms. These weren’t merely alternate names under which a person published work. They were alternate names under which Pessoa published work that was unique to each of those names, because they weren’t merely names. They were individual identities that inhabited his imagination. There is much that is remarkable about the work and life of Fernando Pessoa, not least of which is that his family name translates into English, from his native Portuguese, as the word “person.”

Pessoa’s The Book of Disquiet (Livro do Desassossego) was the inspiration for Disquiet.com when I launched the website in 1996, and the name in turn lent itself to the Junto when I proposed the first project during the first week of January 2012. The 10th anniversary of the Disquiet Junto will occur this coming January 2022. The word Junto was borrowed from Benjamin Franklin’s Junto society, which he formed in 1727 for “mutual self-improvement,” an aspiration carried on by our Junto. Perhaps in six years we can celebrate the tricentennial of Franklin’s Junto.

Seven More Important Steps When Your Track Is Done:

Step 1: Include “disquiet0500” (no spaces or quotation marks) in the name of your tracks.

Step 2: If your audio-hosting platform allows for tags, be sure to also include the project tag “disquiet0500” (no spaces or quotation marks). If you’re posting on SoundCloud in particular, this is essential to subsequent location of tracks for the creation of a project playlist.

Note: Please post one track per weekly Junto project. If you choose to post more than one, and do so on SoundCloud, please let me know which you’d like added to the playlist. Thanks.

Length: The length of your finished track is up to you (to all three of you).

Title/Tag: When posting your tracks, please include “disquiet0500” in the title of the tracks, and where applicable (on SoundCloud, for example) as a tag.

More on this 500th weekly Disquiet Junto project — Humming to Your Selves (The Assignment: Play a tune by yourself and as if by two people whom you invent) — at: https://disquiet.com/0500/

The image associated with this project is by aesthetics of crisis, and used thanks to Flickr and a Creative Commons license allowing editing (cropped with text added) for non-commercial purposes: