For many months now, I’ve made it a habit that each Saturday I collate in a single blog post the tweets I made over at twitter.com/disquiet during the preceding week. However, having taken the past week off Twitter for the Thanksgiving break, I find I have zero tweets for repackaging today.

Now, the main benefit of reposting the Twitter material here on Disquiet.com isn’t really about archiving it, though having searchable access is nice. It’s great, over time, to be able to sift through one’s own site, one’s own outboard memory, for the things one has said about a certain novelist’s penchant for sonic observation, or a certain producer’s employment of piano samples, or an unusual and inspiring cross-genre team-up¹, or a certain operating system’s annoyances², or a piece of hardware’s³, or the pleasures of re-watching a favorite TV series⁴. The main benefit of doing so, though, is the process itself, the process of reading back through a week’s tweets and reflecting on what I’ve said offhand, what I’ve learned, and what conversations I’ve participated in.

I take every weekend off Twitter, which means that on a given Saturday morning, when I normally do the tweet package post while drinking coffee, I have five days’ worth of material to work through, Monday through Friday. This all takes maybe 10 minutes or so, a bit longer if I used a lot of images or links. Sometimes the previous Monday feels like a month ago. Often I recognize that my mood has shifted over the course of the week. On occasion I watch my attitude on a given topic veer this way and that as I absorb and process input.

This week has been different. This week I’ve been offline. A week without Twitter is a strange thing, as the habit to tweet has become so natural, so commonplace, as much an urge as an outlet. I use Twitter as a public notebook as much as I do as a water cooler, as a way to float concepts as much as a means to chat. A post I make to Twitter is sometimes a trial run of an idea, an inchoate thought, a stray observation, a bit of data. Sometimes I’ll follow up with an additional thought, which leads to a thread. Sometimes I’ll revisit the idea from another angle later in the day or the week. If someone responds, then a conversation may ensue.

For the past week, I’ve had no public venue, not in terms of social media. The break has been healthy. A week without Twitter doesn’t mean I’ve had no notebook; it just means I haven’t had a public one (aside from some pie photos on Instagram). When I read an interesting phrase in the new John le Carré novel, Silverview, which I’m almost finished with, I just jotted it down in an actual notebook, a paper one. Same with something in the new Neal Stephenson, Termination Shock, which I’m about halfway through, and something about guitar practice (I’ve been working on Travis picking), and something about the recent Robert Fripp box set, and about a few songs by the Jam. There’s been other writing, long form work, more on which later, and a few looks back at the year. All in relative isolation. I’ve still posted here every day, but here, on my own website, is different from Twitter. Here, it is quiet.

See you next week at twitter.com/disquiet.

These are all things I would have tweeted this week. Some, yes, would have been threads:

¹Got a new CD player, because the old 5-CD changer died after 30 years of dedicated service. A simple, small, stereo component CD player is difficult to come by these days. For the moment, I’m using a DVD player with audio outs, but it has no display readout, so you don’t know what track is playing, which if fine for the Monkees’ greatest hits, but not so useful with Morton Feldman’s For Christian Wolff. (It’s also oddly difficult to find an affordable Blu-ray player with audio outs.) The first CD I put on was the Necks’ team-up with Underworld, one of my favorite albums in recent years.

²So, both iOS/iPadOS and macOS use the same gear icon for something similar, but the former calls it “Settings” and the latter calls it “System Preferences.” Within macOS, the “System Preferences” icon is re-used for “Software Update,” whereas in iOS/iPadOS, a simplification of the icon is used for “General,” which is how you navigate to “Software Update.”

³I got a “hardware authentication device,” and sometimes if my finger touches it the computer spits out random arrays of characters. Part of me wants to share what the letter salad looks like, but for all I know it’s some sorta private digital fingerprint. (Also, I’d swear this evening it somehow made the laptop screech out loud, such that initially I thought the noise was coming from the TV, which was on mute.)

⁴Been re-watching Person of Interest (2011-2016, 103 episodes). There is so much sound in this epic A.I. surveillance drama. That’s Michael Emerson as Harold Finch, working undercover: 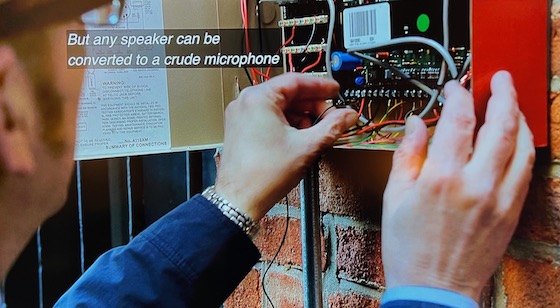