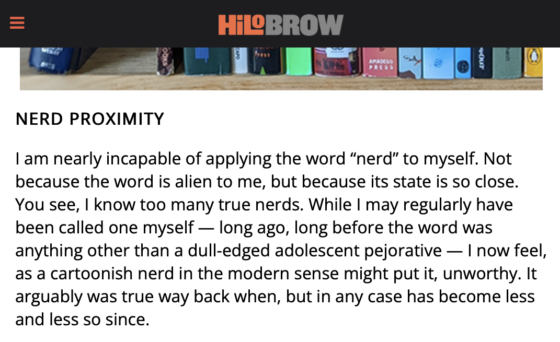 My final 2021 article (for somewhere other than Disquiet.com) is about declining to call myself a nerd. I wrote it for HiLobrow, as edited and encouraged by Peggy Nelson. My short piece is the final entry of a 25-part series that included writers Lucy Sante, Vanessa Berry, Annie Nocenti, and other far greater nerds.

I’d mentioned when Dean Stockwell died earlier this year that not long before he passed away I had filed a story for later publication in which I borrowed a nerd-tastic monologue of his (well, Cavil’s) from Battlestar Galactica. This is that article.

The HiLobrow piece begins with the paragraph above. Read the full piece: