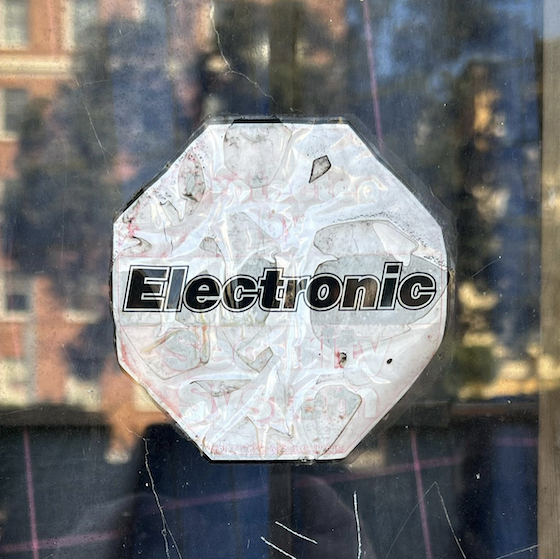 I’m certain I’ve previously taken a picture of this aging sticker that is exposed through the front window of a storefront and has seen more than its share of direct sunlight, such that much of it has been bleached beyond recognition. The thing about taking pictures of a thing in decay is that even if you take another photo down the road, the thing has become, in essence, a different thing during the interim. It’s like a corollary the Ship of Theseus thesis. Sure, it’s interesting to think about whether the whole remains the same as its parts are replaced over time. But what if the parts remain, and simply themselves change, and if so what is a marker of meaningful change? When is it so changed that it’s no longer the same thing. Certainly, for a sticker, by the time its message is no longer comprehensible. How long has this one been in such a state? Presumably this was a long ago warning about store security surveillance. Is the camera even still functional? Or is the store no longer watching us, and we’re just watching it? A passerby would have ignored this sticker when it was serving its generic sentinel purpose. Now that it is significantly altered, it is a focus of attention.