This paragraph is from early on in Flaubert’s Parrot, a novel by Julian Barnes that is so colorful and precise in its details that it reads like a European variant on the sort of observational detective work one expects from Paul Auster or Nicholson Baker. So far (I’m barely a quarter through), the book is like a highly sensitive Simenon protagonist trying to sort out the identity of a literary Maltese Falcon (minus any particular consequence, at least where I’m at in the book). 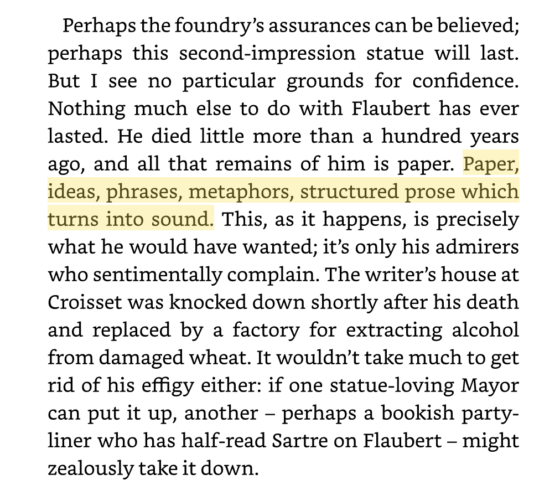 In this moment, Barnes (or the character narrating the book) is telling us, the reader, about a reproduction of a statue of the famed novelist (1821-1880, best known for Madame Bovary). Flaubert is long dead, as is his parrot, and Barnes is depicting a transmutation, a creative process, that ends in a state that the reader might not have expected: not with story, or novel, or memory, but with “sound” itself. The end of the line is not so much an anticlimax, in the William F. Buckley Jr. sense of the word, as it is a surprise.

No doubt this idea of human sound as a signature of our species is going to play a role as the book proceeds. We’re also told of the title subject: “The parrot, the articulate beast, a rare creature that makes human sounds.” Thus, sound is what we work toward, and what makes us human, and what provides a unique point of intersection with a beast that can imitate us. We’re listening to Flaubert’s parrot listen to us.