As always, in between descriptions of his voracious reading and hints at ongoing projects, Warren Ellis wrote in his April 24 Orbital Operations email newsletter about his everyday practical habits. This time around that meant the way his phone is optimized as a central listening device. And after sharing a screenshot of one of the screens on his phone, with all the apps and widgets aligned, he included a parenthetical that made me smile: “(It’s possible that even Marc Weidenbaum is looking at me like I’m nuts right now).”

And as it turns out, I do have a screen on my phone that is not particularly dissimilar from his: 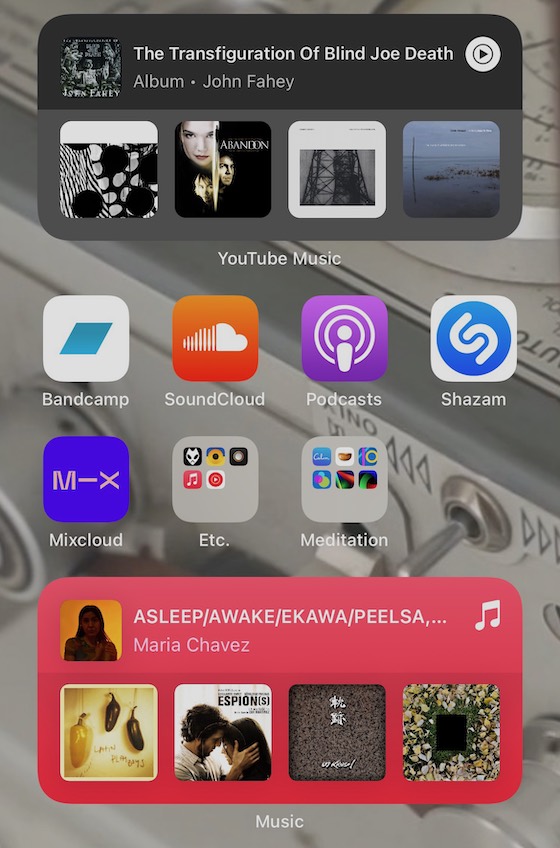 One swipe right from my phone’s home screen is, indeed, a music-specific page. Let’s break it down:

The top widget is for YouTube Music. There are a lot of streaming services. I’ve tried most of them. I find them largely dispiriting (due to the lack of contextual information), insufficient (the widely hailed and also economically suspect “universal jukebox” has bizarre voids, such as the instrumental tracks I often buy hip-hop and r&b 12″s to access), and not particularly distinct from each other (though kudos to those services that do, at least, list the record label, even if it isn’t clickable to access a full catalog, as I vaguely recall used to be the case with Rdio). So, of all of ’em, why do I subscribe to YouTube Music? (Especially since I now use an iPhone, my first ever, having previously been on a sequence of Androids, all the way back to the G1.) The main benefit of YouTube Music is the subscription gets me ad-free YouTube.

The bottom widget is for Apple Music. I don’t subscribe to Apple Music, but I do, for the time being, have the annual subscription to iTunes Match, which lets me upload my own audio files to the cloud. When I receive a promotional copy of interest from a musician, record label, or publicist, I drop it into the Music app on my laptop and eventually — this may be vaguely seamless, but it’s not time-unintenstive — it becomes available to me more widely. Also in there are some old records I bought on iTunes when DRM roamed the Earth. (If anyone has recommendations for better ways to do this on an iPhone, lemme know. I’ve tried lots of options — see two paragraphs down — and none of them have been much better. I do know that I have close to zero interest in yet another gadget, so carrying a separate device just for music is close to a non-starter for me. But, as Romeo Void sang, never say never.)

Between the two widgets are some apps and app folders. I buy music on Bandcamp with some regularity, and also get a heap of promotional copies through the service. I mostly listen to SoundCloud via my laptop browser, but it’s handy to have on my phone (the app has a lot of shortcomings, most notably that there’s no access to the DMs). I don’t listen to many podcasts; thus far, the Apple Podcasts app has been sufficient. I don’t listen to a lot of pop music, but when a song catches my fancy out in the wild (which these pandemic days generally means: as part of a TV show or movie while I’m seated on the couch), Shazam keeps track of things I’ve perked up to. Mixcloud is often a good place to find music I like in new contexts, leading to me finding out about adjacent artists whose work I might not know, or just hearing the music I like in a different aesthetic continuum than I think of it as being part of. (And if you’re looking at the tiny album covers closely: yes, I do listen to a lot of movie scores, with Cliff Martinez and Clint Mansell always in rotation.)

The “Etc.” folder is for apps I’ve tried to replace Apple Music with for syncing, to little avail. It’s also got the Apple Music and YouTube Music apps in there, if I wanna pull them up, rather than revisit a recent listen from the widgets. And the “Meditation” folder is as it seems (Calm, Insight Timer, and four apps that Brian Eno did with Peter Chilvers, the original Bloom still being my favorite).

Also worth noting is what the screen doesn’t contain: YouTube, where I do a lot of my listening, and any audiobook apps (Audible, Hoopla, Libby). Those are elsewhere on my phone, and I spend a lot of time in them. Also not on this screen are any of the possibly hundreds of apps I own for making music. They’re on my iPad for the most part, though I have a few of ’em elsewhere on my phone (I have a few setups I use for producing generative background music, but my phone is optimized for battery life). And also not here are any white noise apps. I used to employ them frequently, but since switching to an iPhone, I just use the iOS Background Sounds feature.

So, that’s my central listening device. And it’ll probably look different in a couple weeks. Do you have a music/listening screen on your phone, and if so, what does it look like?

One thought on “Central Listening Device”