When we’re young, if we’re fortunate, terms like “heavy heart” and “heartbroken” are just that: language on the page, perhaps language overheard. As we age, those words take on meaning through experience. It is in that sense that I note the death of Justin Green, a great American comics creator, and also an old friend of mine.

Justin was one of the earliest comics memoirists, best known for his 1972 Binky Brown and the Holy Virgin Mary. I met him 20 years later, when I was a few years out of college. I’d moved to Sacramento, California, in 1989 to help edit the music magazine published by Tower Records, called Pulse!, and after a few years, I started to introduce comics that I edited. The first comic was by Adrian Tomine, still in high school at the time. His piece ran in the February 1992 issue of Pulse! It was the start of a monthly three-year collaboration that bridged him starting college at Berkeley.

The next issue, in March 1992, Justin Green debuted the first of what would end up being a decade straight of comics in the magazine. His first piece was about when Benny Goodman met Charlie Christian. He’d proceed over the years to tell stories about everybody from Leadbelly to Elvis Presley to Buddy Holly to Mezz Mezzrow. Like his friends and fellow cartoonists R. Crumb and Bob Armstrong, Justin favored old American music. This meant comics about John Philip Sousa, and Stephen Foster, and Fats Waller. Occasionally I could nudge him out of his comfort zone, especially when I wrote a piece for him, like the one I did about Philip Glass still driving a taxi cab after the premiere of Einstein on the Beach, or the one I did about an imaginary retirement home for old corporate mascots, as a means to tell a concise, not very serious story about the history of the 8-track cassette tape. These were later collected in a book, Musical Legends, published by Last Gasp. I left Pulse! in 1996, but continued to write and edit freelance for Tower. At some point after I left for San Francisco, where I still live, the talented editor Bill Forman began to also work with Justin on his comics. I continued to edit the Flipside comics that appeared on the last page of every issue. (These started with Peter Kuper in 1993 and ended with Jeff LeVine in 2002, the final issue of the magazine, for which I wrote the cover story, which was an interview with Missy Elliott. I’ve posted a semi-complete index of them.)

Like Adrian, Justin lived in Sacramento, which is where Tower was based. Technically Tower was in West Sacramento, but the original store was in Sacramento, and that’s where I lived. I first contacted both Justin and Adrian because they were local. This was before email was a norm, and back when fax machines were still a daily tool at the office. I wanted to work with local cartoonists, in order for us to be able to meet in person and go over the illustrations and shape the stories. I’d noticed Adrian lived in town because I saw his address in his self-published zine, Optic Nerve. 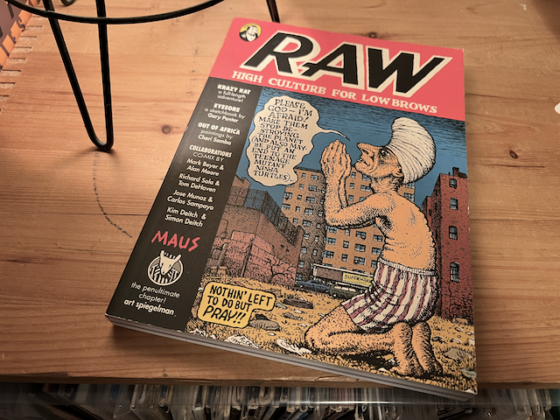 As for Justin, realizing he lived in town was a huge surprise. I had recently purchased the latest issue of Raw magazine. In each issue, on the table of contents, Raw listed the location of the various contributors. It was usually New York City, Paris, London — maybe Berkeley and Barcelona. And there in that issue, volume 2, number 3, was “Justin Green, Sacramento” — directly above Gary Panter, below whom was a collaboration between Alan Moore and Mark Beyer. 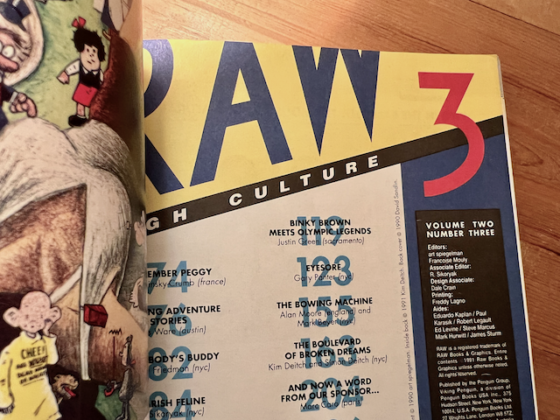 I first had coffee with Adrian at a local cafe, and I had no idea he was as young as he was until we met. (He later told me he mistakenly had thought I was wearing my Slayer t-shirt ironically.) I first visited Justin, who lived with his wife, the incredible comics artist Carol Tyler, and their then young daughter, Julia, at their home. I remember walking around back, where the house was protected by a discarded Colonel Sanders statue. Justin was as surprised at how young I was as I had been when I met Adrian. He talked me through his process, and then we began to discuss the sort of work he would do.

I’m very sad as I write this, and while memories are flooding back, they’re also straining against a lot of emotions. At this stage, I want to pause the reminiscence, or at least try to. His death is still very fresh — I just learned today when Carol announced it on Facebook — and the 30 years since I met him have collapsed on themselves in a way that is confusing and surprising to me. One thing I recalled today was that originally, Justin didn’t intend to do biographical sketches each month. His original idea was to tell the story of a fictional blues musician. We roughed out some concepts, but ended up going in another direction. We never revisted that fictional blues musician, and I haven’t thought of that character — still inchoate after all these years — in the longest time. It’s like he’s still there, half-formed in my imagination. It’s uncanny.

I miss Justin terribly. The last time we were in touch was in November of last year. I’m working on a project that might have enabled me to visit him in Cincinnati, Ohio, where he’d moved awhile back. He reported that he was in poor health, as well as having “the standard woes of a septuagenarian regarding energy levels, sore feet, occasional bouts of rage that verge on Tourette’s symptoms” — the latter something anyone who’s read Binky Brown would appreciate. He also sent me a recording of a song he was working on. Justin was concerned he just didn’t have the project in him, but still, he wrote, “If it’s really really really important to you that I sign on, I’ll give it a go.” I could tell this was not a good idea to push for, and I let him know I appreciated it. And that was the last we corresponded.

There’s much more I want to recount about what I learned from Justin, professionally and personally, and I want to share some examples of his comics. That will have to wait. I’m wiped out. I was young when we met, and now I’m older than he was then, a warp of time that my mind can’t quite make sense of. For many years I had a piece of paper on which he had written something that summed up his work ethic. It said, in as many words, that if you’re in your 20s you should be pulling one all-nighter a week. I don’t pull all-nighters anymore, but there’s still a lot of Justin in me, and I cherish every ounce of it.