From Soundscape to Score in Andor

And "the bell guy" 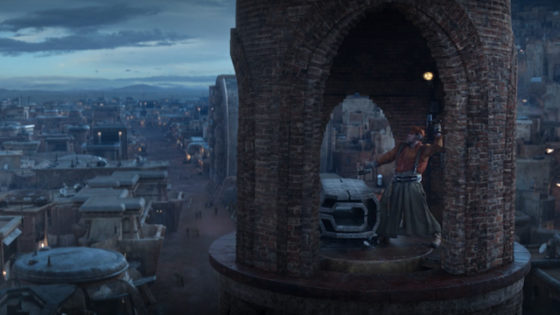 I was really struck, so to speak, by the anvil carillon atop a tower toward the start of the second episode of Andor, playing now on Disney+. So too, apparently, was James Whitbrook, deputy editor at i09, who wrote a lengthy appreciation of “the Andor Bell Guy” the day after the show’s first three episodes debuted. “There’s people here and there,” he writes, “lurking out there in the early dawn, but it’s when the bell guy that’s not really a bell guy — he’s the bell, I guess, spiritually speaking — rings his hammers that life starts on Ferrix, the bustle of the town below beginning to blossom as his hammers ring out, over and over. The sound fades, the day begins, and bell guy presumably goes on with his life, his job done until the morrow.” Pretty much the only thing I’d add is that the sound doesn’t entirely fade. As I hear it, the bells fade, but they are then not just subsumed but emulated by the score (composed by Nicholas Britell, best known for his work on Succession). This series has some of the most memorable music in any of the Star Wars TV series so far, in part because it doesn’t sound particularly like the John Williams music that has long defined the Star Wars universe. ➔ gizmodo.com.