This Week in Sound: Mindless Honking by Motorists

These sound-studies highlights of the week originally appeared in the October 18, 2022, issue of the free Disquiet.com weekly email newsletter This Week in Sound: thisweekinsound.substack.com.

▰ HEAR, HEAR: We may smart at earbuds that cost over $200, but it says something in an industry when a $1000 price tag is considered a steal. Such is the case in hearing aids, which can run in the range $6000 but thanks to a recent change in the law (here in the U.S., that is) are no longer prescription-only, and thus are ripe for consumer-grade exploitation. Enter the Sony CRE-C10 (and, for $300 more, the CRE-E10). The devices are built for daily use for those with mild to moderate hearing loss,” writes Steve Dent at Engadget. According to the article, Bose and Lexie have also introduced OTC hearing aids. “Companies like Jabra have also leaped in. And last year, Sennheiser sold its consumer audio business to the hearing aid specialist Sonova.”

▰ CONSUMPTION JUNCTION: A look at how audiobooks are influencing publishing and reading, including whether they’re more in competition with podcasts than with physical books (certainly the case for me, data point of one). This chart, from an article by Karl Berglund at publicbooks.org, assesses 504 commercial titles accessed by consumers on a Swedish platform called Storytel. Writes Berglund, “Interestingly, regarding audiobooks, all kinds of literature in the dataset share these temporal reading patterns.” (Found via twitter.com/kaveinthran.) 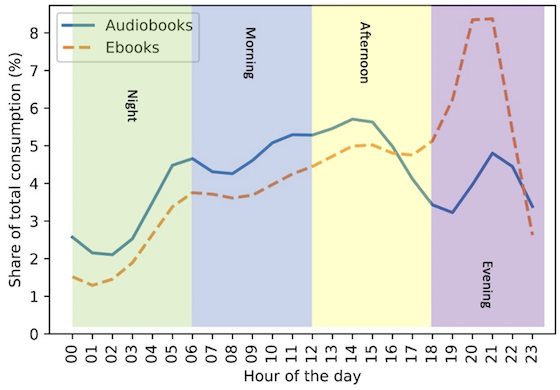 ▰ MIC DROP: “New technology developed as part of the Blue Boat Initiative, a research project organized by the MERI Foundation in Chile, may help reduce the negative impacts on marine life and ecologies,” writes Elías Villoro in Boing Boing. “In October, a two-meter-long buoy equipped with this technology and other sensors will be dropped into the Gulf of Corcovado, off the coast of Chile, an area busy with both whales and ships. Using LIDO, it will be able to detect whales within at least a 10-kilometer radius and automatically send an alert to Chile’s navy, which will, in turn send a message to nearby vessels, encouraging them to change course or reduce their speed.”

▰ CITY BLIGHTS: There’s a comic in the Washington Post by Pepita Sándwich in which the artist talks about making an oasis of quiet in noisy New York City. This is just one panel from it. Read the whole thing (accessible even if you don’t have a subscription). 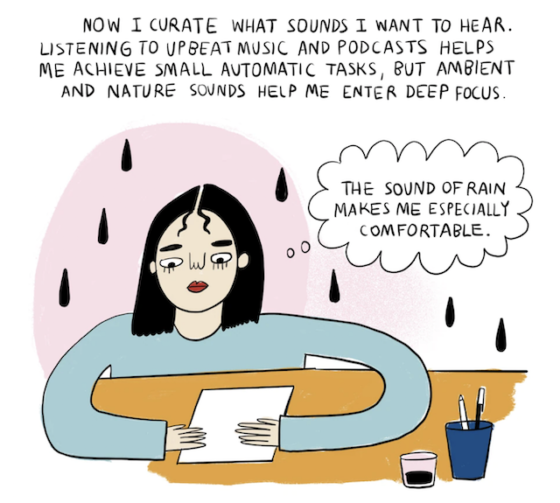 ▰ “RUUGH!!” TRADE: “Although onomatopoeias and interjections are an indispensable part of comic books, translators cannot occasionally find a suitable meaning for them, or they erroneously translate these sounds” — co-authors Zahra Ebrahimi, Mohammad Reza Esfandiari, and Forough Rahimi, in London Journal of Research in Humanities and Social Sciences, explore the translation of onomatopoeias and interjections in Persian translations of comic books. They looked at 83 sounds across six issues of The Walking Dead (the comic, that is — not the TV series based on it). (Thanks, Mike Rhode!)

▰ HONK IF YOU LIKE SILENCE: There’s so much news about noise pollution that coverage of the matter in India alone could be a newsletter unto itself. I note an article by Garima Prasher in the Bangalore Mirror primarily for its inventive use of a familiar phrase from another content entirely as its title: “Right to Remain Silent.” Notes the author: “The park has a couple of important government offices whereby important proceedings take place; mindless honking by motorists disturbs these proceedings.” Maybe if we put more government buildings near public parks, then the government would do more to keep public parks quiet.