This Week in Sound: Weaponized Rickrolling

These sound-studies highlights of the week originally appeared in the November 1, 2022, issue of the free Disquiet.com weekly email newsletter This Week in Sound: thisweekinsound.substack.com.

▰ VIRAL HIT: “Spreading Deadly Pathogens Under the Disguise of Popular Music” is the catchy title of the article in question (read the PDF). Its authors designed music to trick the sensors in a biolab to leak hazards. The resulting music triggers resonant-frequency thresholds used in the safety system. (That’s my poor paraphrase.) This is, in a manner of speaking, weaponized rickrolling.

That’s Entertainment: From the pop charts to a flow chart

“The attacker selects music and inserts segments of resonant frequencies within the music … using a software named Adobe Audition. Though someone who has listened to the music many times before may identify the change in the music, the vast majority of people will either be oblivious of the change or will incorrectly ascribe the change in the music to a speaker issue.” The song used as an example? “Hello” by Adele. The authors are a professor (Mohammad Abdullah Al Faruque) and two researchers (Anomadarshi Barua and Yonatan Gizachew Achamyeleh) from the University of California, Irvine. (Found via Geoff Manaugh. The original image, from which this one was extracted, was published with a Creative Commons Attribution International 4.0 License.)

▰ EUPHONIA 2.0: Dorothy R. Santos notes, on Slate, that “conversational feminine A.I. are embedded in many of our visions of the future.” This phenomenon long predates the contemporary virtual companions named Alexa, Siri, and Cortana (“a quasi-phalanx of helpful, cheerful A.I. women, ever-ready for our commands”). Santos notes examples from Joseph Faber’s Euphonia (“a mid-19th century analog voice synthesizer”), to the 1999 Disney movie Smart House, to the (excellent) BBC series Humans. And she recounts all this in the process of responding to Ysabelle Cheung’s science fiction short story “Galatea.” Writes Santos: “Her story provokes us to contemplate what women might desire from feminine A.I. figures originally programmed to please, entice, and serve a male-coded user. In Cheung’s ‘Galatea,’ the female characters, human and A.I. alike, model irreducible nuance in their utterances and speech, despite being programmed (digitally) by their creators and through (analog) social forces, gendered expectations, and norms.”

▰ BIG D̶A̶T̶A̶ EARS: McGill University professor Jonathan Sterne, author of MP3: The Meaning of a Format, and colleagues ask “Is Machine Listening Listening?” (Available as a PDF.) That question contains other questions: “[W]hat do the researchers who build machine listening systems think they do? What do the corporations and states who deploy them think they are doing? Do their users treat their listening machines as listeners?”

▰ BACKGROUND NOISE JUNGLE: “Noise in preschools primarily affects speech intelligibility. Linguistic information is because of background noise masking, which has a particular impact on young children, children with a first language other than the language of instruction and children with language deficits” — a report from Acoustic Bulletin, a publication of Ecophon, which “manufactures and markets acoustic panels, baffles and ceiling systems.” 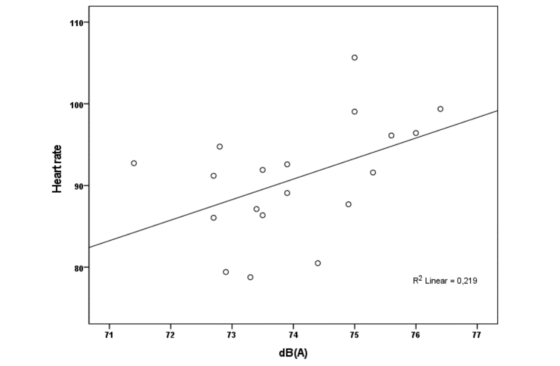 Quiet Time: This graph shows how as the sound pressure level, in decibels (horizontal axis), rises, so too does the heart rate of individuals present (vertical axis).

The key recommendations are: (1) reduction of group size, (2) introduction of sound absorbing measures, and (3) an “activity-based” approach to room design. (Image from the original Acoustic Bulletin article.)

▰ LOWERING THE BAR: “With the once hyper-active clubs forced into ‘silence’, party lovers from the city remain disappointed with the ban on loud music after 10 pm. Not all of them were comfortable with the idea of pubs handing out headphones if patrons requested loud music.” Noise pollution laws kick in in Hyderabad, India.

▰ IN C: “Nightmares Can Be Silenced With a Single Piano Chord, Scientists Discover,” via Science Alert: “A study conducted on 36 patients diagnosed with a nightmare disorder showed that a combination of two simple therapies reduced the frequency of their bad dreams. Scientists invited the volunteers to rewrite their most frequent nightmares in a positive light and then playing sound associated with positive experiences as they slept.” And the piano chord in question, in case you’re wondering, is C69. (Thanks, Glenn Sogge!)

▰ HI-DEF JAM: Blind media artist Andy Slater talks about how his sensory impairment “informs” his work: “I realized that with the screen reader on my iPhone, there were some recording apps that actually were accessible. If you got microphones to plug into phone, you could do hi-def field recordings. That’s when I started recording in different spaces. I became more aware of my surroundings, and was finally able to capture the echolocation and sound in a room that lets you know how big the room is, what might be in the room, what the floor, the walls, or the ceiling are made of.” (Via holo.mg)