This Week in Sound: He Used to Bite His Music Boxes

These sound-studies highlights of the week originally appeared in the November 8, 2022, issue of the free Disquiet.com weekly email newsletter This Week in Sound: thisweekinsound.substack.com.

▰ THE WHOLE TOOTH: Robert Friedman, the owner of a piano that once belonged to Thomas Edison, spoke with NPR’s Scott Simon about its bite marks — which are reputed to be those of Edison himself. (Thanks, Rich Pettus!)

Friedman: He used to bite his music boxes, and he bit his piano. …

Simon: I’m trying to imagine anyone, much less Thomas Edison, with their mouth clamped on a piano.

Friedman: The sensation is amazing. It goes up through your skull, your head resonates like a tuning fork. It’s an amazing feeling. It goes through your shoulders, but you get the true vibration of the instrument, and you hear the piano equal, if not better, than if you just hear it through your ears.

“The company is working on an initiative to drop the ‘Hey’ in the trigger phrase so that a user only needs to say ‘Siri’ — along with a command. While that might seem like a small change, making the switch is a technical challenge that requires a significant amount of AI training and underlying engineering work. … The complexity involves Siri being able to understand the singular phrase ‘Siri’ in multiple different accents and dialects. Having two words — ‘Hey Siri’ — increases the likelihood of the system properly picking up the signal.”

▰ FIELD’S RECORDING: Details on the sound design of Todd Field’s new film Tár, starring Cate Blanchett as a conductor-composer: the director wants the audience “to feel [Hildur Guðnadóttir’s score] but almost not hear it”; Blanchett’s title character has misophonia (“which means she’s very sensitive to certain sounds”); omnidirectional microphones were used to record the symphony orchestra, “leaving the sound team more than 50 tracks to work with.”

▰ QUIET TIME: Check out this gallery, on the Dezeen (as in “design”) website, of 10 different “noise-regulating acoustic products for communal interiors.” 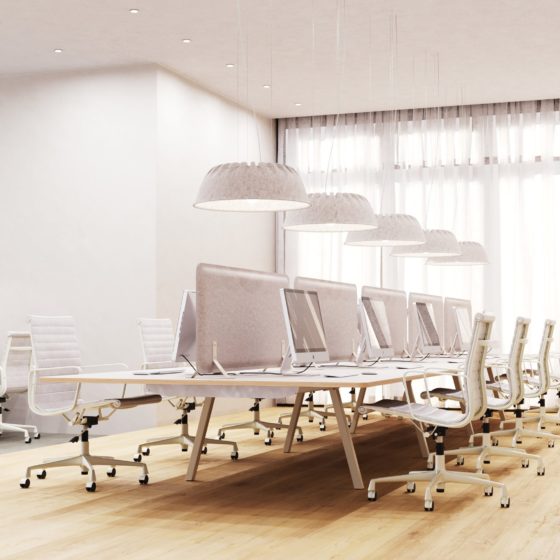 ▰ TAP DANCE: “After continually deflecting accusations that it surveilled droves of politicians and journalists using invasive phone-tapping software, the Greek government has decided to ban the sale of spyware altogether. But the government also wants everybody to know that this is in no way an admission of guilt and that it definitely didn’t do anything wrong” — is how Gizmodo sums up a recent scandal.

▰ WATER TORTURE: “In the US border town of Niagara Falls, residents accustomed to the soothing roar of the famous waterfalls recently discovered a much less pleasant sound: the ‘haunting hum’ of bitcoin mining farms.” The miners were reportedly attracted by the area’s “cheap hydroelectric power.” Comments from residents:

“It’s very mentally daunting. It’s like having a toothache for 24 hours a day every day.”

“I get four hours of sleep, maybe, because of that constant noise.”

“I’m going to be protesting till the hum is gone, basically, till I get the roar of the falls back because that’s what I used to hear.”

▰ VISUAL HEARING AID: There was a great multimedia piece in the Washington Post that explores what hearing loss is like — and it does so by visualizing the experience. The article is credited to Amanda Morris, a reporter, and Aaron Steckelberg, a “senior graphics reporter” (what a cool job), who did the visuals. No subscription necessary to see it, as I can share this gift link. Audiograms and other graphic aids tell the story, such as how the siren is situated on the chart reproduced below. 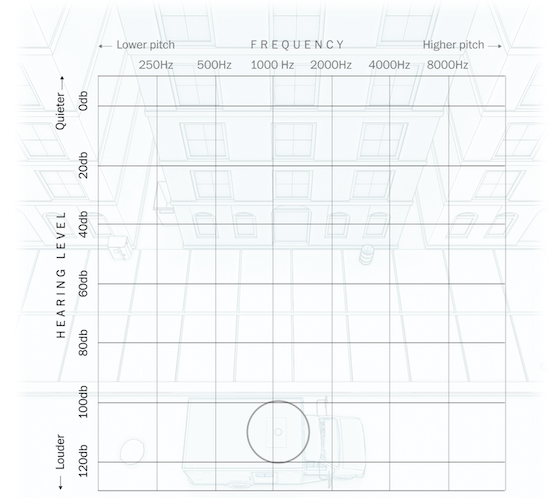 Freq Out: This example of a Washington Post chart situates the pitch and volume of a passing siren

▰ AUTO MOTIVE: SlashGear’s Alistair Charlton is not excited about the broadening array of voice recognition systems in cars: “[C]ar manufacturers’ own voice recognition systems? They’re less than stellar. These are often summoned by saying ‘hey’ and the vehicle manufacturer’s name. … Siri is a made up name, and no one goes about their day saying ‘Okay Google’ unless they want to talk to the Google Assistant. But in the car? You’re quite likely to mention the brand of the vehicle you’re in when talking to a passenger, or when you see another one out on the road. Before you know it, your music is muted and the car is listening when you don’t want it to. We might forgive all this if car manufacturers made decent voice assistants, but it’s the tech firms who have the upper hand here. Please, automakers of the world, stick to Alexa, Google Assistant or Siri and leave it at that.” (Just as a side note: I’m not remotely likely to say the name of my car to a passenger, but I’m not much of a car person.)

4,858: Number of tickets issued for vehicular noise pollution in Islamabad, Pakistan, in the past six months

500,000: The number of consumer surveys that make up an an AI-powered service that aims to “predict the granular emotional impact of music” (it’s called OnBrand) 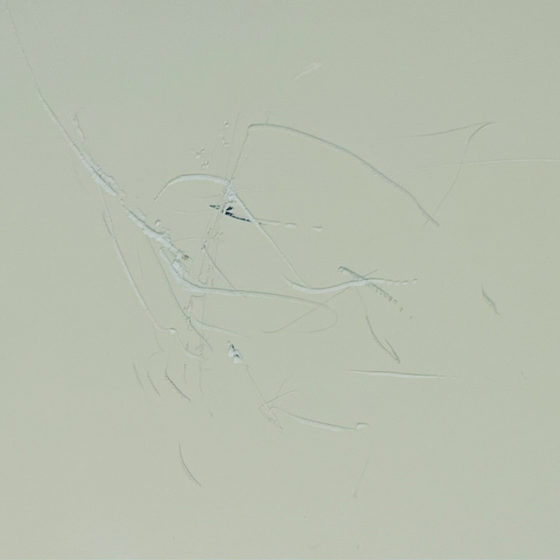 After working in this little rental office for a while I realized I hadn’t been practicting guitar as much so I bought a used electric guitar from someone who plays in a funk band and was about to become a parent for the first time. These are the markings of the previous owner’s belt buckle on the back of the guitar (it’s a Telecaster, so it’s got a very flat, even back). I love the idea of such scratches being a kind of reverse transcription: musical notation after the fact; the imprint of performance rather than directions for a performance.

Sounds previously considered illusions have turned out to exist. “A musical sound once thought to be heard only in our heads as a quirk of the ear canal is actually real,” writes Karmela Padavic-Callaghan at the New Scientist. “Violins can produce these unusual tones – and higher quality violins can produce them more strongly.” Padavic-Callaghan explains that questions about this third tone — eventually called a “combination tone” — date back over 300 years, to a discovery in 1714 by Giuseppe Tartini (1692-1770), a Baroque-era Italian violinist and composer.

A newly published article in The Journal of the Acoustical Society of America is the source of the New Scientist piece. Interestingly, in the work of the scientists exploring the subject, it turned out that older instruments produced more prominent third notes.

To put this discovery (credited to Gabriele Caselli, Giovanni Cecchi, and Giulio Masetti) in context, a distinction has now been made between what we experience as heard versus what is actually present in the world. It would be one thing if the sound exists only because of how our ears are structured (“It was thought that these tones arose entirely in our ears, due to the way sound is amplified by the cochlea, rather than actually emanating from an instrument”). In contrast, the violins actually produce this previously mysterious sound. The discovery both upends a long-held misapprehension, and potentially opens up compositional techniques for composers who wish to exploit this sonic phenomenon. (Thanks, Glenn Sogge!)

I do this manually each Saturday, usually in the morning over coffee: collating most of the little comments I’ve made on social media during the preceding week. I’ve long thought of social media — Twitter especially, though I’m taking a break, and Facebook to a degree, and increasingly Mastodon — as my public notebook. Or more to the point, my public scratch pad, which seems a degree more rough and unformed than a notebook. I’ve found it personally informative to revisit the previous week of thinking out loud in public. Also, I think knowing you’ll revisit what you say pulls in the reins a bit, in a good way, on what you do say.

What appears here isn’t a full accounting. Often there are, for example, conversations online that don’t really make as much sense out of the context of social media itself. Some of my notes pop up sooner in expanded form or otherwise on Disquiet.com. And sometimes I tweak them a bit, given the additional space. And sometimes I re-order them.

▰ What is that sound? Ah, “rain.” Not just cars’ tires against moist pavement, but actual impact on the building itself. This is unfamiliar here in San Francisco. They’re probably taking kindergartners outside right now to experience it as a teachable moment.

▰ I just gave about $50 to lurk.org to help support the good it does.

▰ I love Ladies of the Canyon way more than Blue or Court and Spark.

▰ Do you listen to MP3s/FLACs/etc. — and if so, do you sync them between laptop/phone/tablet/etc. — and if so, do you recommend a particular approach? I’ve been trying the Match feature from Apple Music, plus apps/services like Doppler, Vox, Plex, and Evermusic, and so far nothing has been particularly enjoyable to use. (I’m very happy if you’re very happy just streaming music. That’s just not what I’m asking about at the moment. Thanks.)

▰ The concept that Mastodon is meaningfully different from Twitter (which it is) is undermined for newcomers by the fact that Mastodon uses the word “toot” for its posts, because that “toot” sounds like a play on “tweet,” which strongly suggests the two are interchangeable.

▰ Morning sounds: the whir and rumble of cars passing faster than the nearby stop sign might suggest is possible, a low level electric hum, the buzz of a plane passing overhead

▰ This week marks the 566th consecutive weekly Disquiet Junto project, which means we’ll be 100 weeks (or just under two years) from the 666th.

▰ I rent a tiny office not far from home. It’s got just a desk and two monitors. The space is a blank canvas until I plug in my laptop, and then all of a sudden there are three screens, and the place is full of information and light, which in this context are one and the same. I never tire of this transformation.

▰ I’ve been digging Substack for my This Week in Sound email newsletter (having moved over from Tinyletter when I maxed out its ceiling). I’m not so sure about this Substack Chat feature. Managing a community is a skill — along with a time sink — unto itself. I get where they’re going, and I think some of the existing newsletters will do well with Substack Chat, but others will experience some serious internal strife, which I have little interest in having to manage. I spend enough time on llllllll.co (a Discourse — not Discord — instance that I help moderate), and the Disquiet Junto Slack. Who knows, maybe down the road. For now, I’ll let others beta-test our increasingly siloed online futures.