When I posted my two-minute footage of a recent redwood forest hike, I mentioned how YouTube is full of far longer journeys. I wanted to share another example of what I’m talking about. This video (not by me) is an hour straight (with a tiny bit of editing) of a walk at Mount Brunswick in British Columbia. The location is beautiful, and the footage fairly high resolution, as high as 1440, which isn’t 4K but will certainly do. Right from the start, the videographer’s footsteps are plainly evident. When walking, one isn’t quite aware of such sounds, because our brains largely blank them out, as they do any repetitive noise that should be ignored in favor of chance sounds that might provide evidence of danger or other reason for alert, if not alarm. That’s evolution for you. By 15 minutes in, the hiker’s breath makes itself heard, and by halfway through, that panting is almost as loud as the footsteps. While the footage remains breathtaking at times (take a look at the view at 50:01), we’re also plainly aware of the effort required to share it with us — it is breathtaking, quite literally, and anything but blissful. At times, the hiker pauses to look around, and in those moments birds might be heard cawing, but for the most part, the panting and foot stseps are our accompaniment. The video is titled “Mount Brunswick Virtual Hike No Music No Talking,” but of course humans can be present, can be heard, even when they’re not talking. I’m not posting this mention here as a critique of the video. Quite the contrary, it’s absolutely gorgeous, a generous act on the part of the individual who posted it. I am registering it as an interesting aspect of the culture of posting nature walks and, by extension, city hikes — that even when there is no talking, it is not as if the world beyond our own presence simply fills the sonic void.

I am not frequently in the wilderness.

This is an experiment that occurred to me to undertake as I walked through a forest three hours north of San Francisco. I was in the redwoods the week before this one, staying in a small cabin to mark the start of summer, or something close to the start of summer. Clearly marked hiking trails behind and all around the cabin made for easy ventures out. The lines of these trails crisscrossed each other at junctures useful to gauging and adjusting one’s itinerary. It was hard not to photograph things, so striking was every direction and every stage of one’s depth of field, from the densely layered beauty of the widely varying greenery, to the markings of horseshoes in the dusty trail, to sudden glimpses of the broad ocean, to the occasional bird, though these were more heard than seen.

I am not frequently in the wilderness. When I am at my desk, I frequently have running on a second screen footage from one or another YouTube account, generally someone’s point-of-view wandering through a city, and sometimes amid a more rural environment. This is adjacent viewing, something that provides a vantage on another place, something that feeds the imagination.

While I stood there in the forest looking ahead at the trail, it occurred to me to do the same. I just had my phone with me, and an old one at that. I set it to video mode and took one step after another forward. I was not about to endeavor to document the hour-long meanderings that my favorite YouTube accounts feature. I just wanted a sliver of the moment, a few minutes. Each step took me further along. The sounds of my feet became more evident to me, because I was aware they were being recorded. The forest ahead brought details into focus out of what, moments before, was just a thicket. Eventually, after two and a half minutes, I stopped mid-trail, did a sweep of the area, and stopped recording. And eventually I returned home, home to the city.

The whistle-like presence of a bird, the rough noise of the microphone responding to a slight breeze, the crackle of a dry twig — each element came into greater focus when I had returned to my desk and was viewing the moving image on the same screen where I normally have YouTube running. I confirmed my own wandering as akin to the ones I so often appreciate vicariously. And so I uploaded it, and jotted down these notes. I don’t foresee myself making many of these — there is only so much time for so many pursuits — but it was useful to share my walk, to experience the layering of memory and moment, to put myself in the footsteps of those who do, to aim my lens in a similar direction, to hear my own footsteps as I have heard theirs.

Under the ice in a Michigan winter

Rob Byers placed a microphone beneath the ice, and found laser beams. Not actual ones, but what could easily be mistaken for such a thing. The battle beneath the ice, as recorded in northern Michigan earlier this year, sounds like an epic fight on Hoth. “A drop in temperature causes a frozen lake to sing through the winter night,” writes Byers of the audio. “The piece starts underneath the ice, recording laser-like sounds with a hydrophone. At 2:15 it transitions above the ice to hear the groans and moans of the shifting ice. Listen for a neighbour’s response.” The streaming file isn’t embeddable, so head over to fieldrecordings.xyz for a listen.

It’s been a good week. Back from the redwoods. 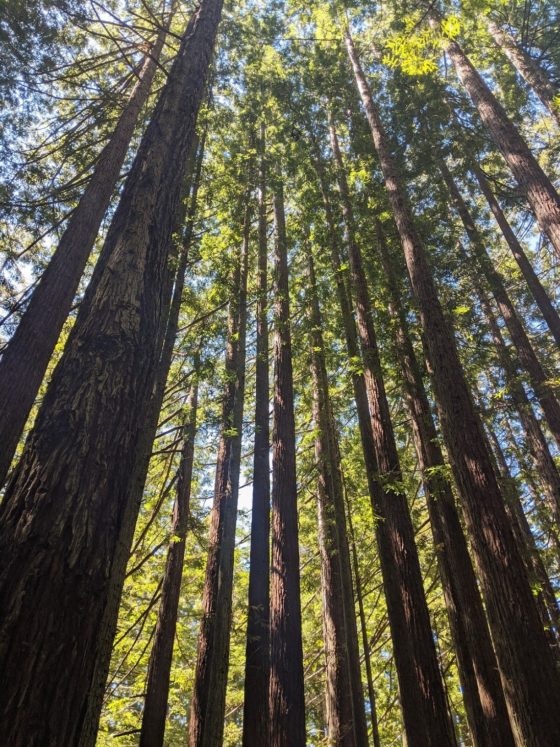 Requisite redwoods-visit photo of one of the greatest buildings of all time: 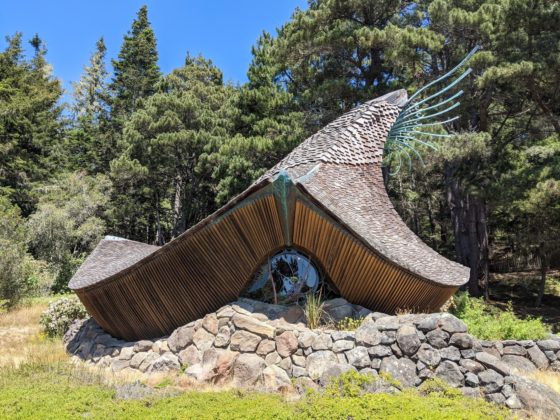 Communed with an elder from the Parliament of Trees: 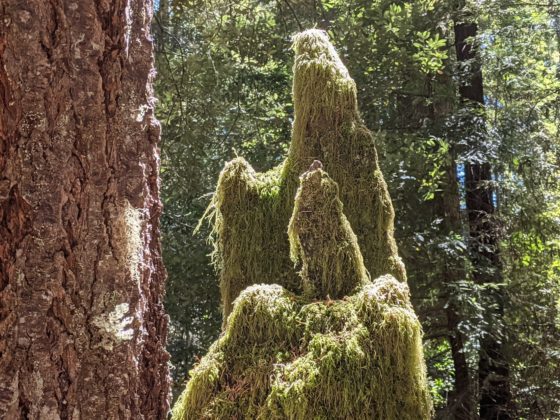 Find I want to capitalize “redwoods” after returning from a visit. Like it’s a capital-R place. Back from the Redwoods.

A Rainy Night in Japan

You hear the cars before you see their lights. You hear the footsteps, a deep, constant pulse in contrast with the pointillist rain. You hear the pressurized air, when it comes into view to clean off the lens. You hear a small thudding, somewhere between footsteps and raindrops, this being the sound of the rain hitting, no doubt, an umbrella or a broad-brimmed hat. You look for a reflection, a shadow, to confirm this inference. This is the Rambalac video “Rainy backstreets of Japan at night 5.” Rambalac has nearly half a million viewers on YouTube, admirers of often hour-long, unedited footage of long, winding walks that are, like this one, generally set in Japan. Sound is a byproduct in these videos, a part of the document, but more frame than focus, more color than subject. Still, here the crackling — the sort that always, oddly, sounds more like fire than rain — is very much a centering component. One can be tempted to just watch, and sometimes I do have one of these running, perhaps at quarter speed, on a side monitor as eye candy, but the full audio-visual experience is where it’s at.