The following piece first appeared at the website nomorepotlucks.org and is reprinted here with permission. At the time of its initial publication, July 1, 2012, I made some initial comments about it on this site: “Listening to Ray Bradbury’s The Martian Chronicles.” 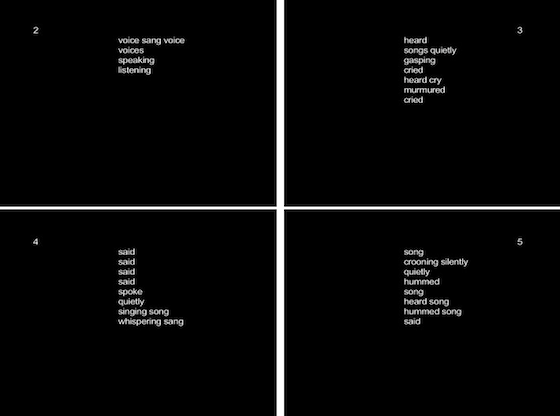 His work, The Rise and Fall of the Sounds and Silences of Mars (2010) consists of a page-by-page excavation of all sonic terms that appear in Bradbury’s original text. These terms appear as columns of words, all actively dislocated from their original context. For example, early on in the original novel, we read: “a voice sang, a soft ancient voice, which told tales of when the sea was red steam””” but in Migone’s version all we get: “voice sang voice.”This work has appeared in various formats; in 2011 it was published as a book by Parasitic Ventures, and mounted as an outdoor installation at the Electric Eclectics festival in Meaford, Ontario. There’s also a freely downloadable PDF.

Migone has a long history in sound-related art. His work playfully skirts the lines between exhibition, music, and sound poetry. With Brandon LaBelle he co-edited the anthology Writing Aloud: The Sonics of Language (Errant Bodies, 2001). He performed as part of the 2012 Whitney Biennial, he is a lecturer in the Department of Visual Studies at the University of Toronto, Mississauga, and is Director/Curator of the Blackwood Gallery.

In the realm of the artist’s book, Migone’s “Mars”suggests itself as a Spartan rendition of Tom Phillips’ Humument, in which fissures of text serve as canvases for visual images and micro-narratives, or, of Brian Dettmer’s objects that mix sculpture and collage.

Despite the piece’s formal rigor, Migone’s “Mars”is also quite personal in that it depicts the text as it appears in Migone’s personal copy of the original Bradbury book. Because he elected to collate the sound-related terms on a page-by-page basis, the project is an elegy to the rigid paginations of physical books, something that is rapidly evaporating with the popular advent of the ebook. This concern for the book’s fragility is just one of the ways in which Migone’s “Mars”draws on themes from Bradbury’s best-known work, Fahrenheit 451, the author’s clairvoyant expression of anxiety about a screen-obsessed culture.

In a lengthy conversation, Migone discussed his broader sound practice, about the decision-making that led to the “Mars”project, and about the promise inherent in sound art that is itself devoid of actual sound.

This conversation occurred on the phone in spring 2012, shortly before Bradbury passed away at age 91, and it is presented here, in a lightly edited version of the original transcript.

Marc Weidenbaum: How did this specific book, The Martian Chronicles by Ray Bradbury, become the focus for your piece?

Christof Migone: I was curating a show in Montreal and one of the artists — he makes little robots — referenced The Martian Chronicles in his artist statement. It seemed that it was my due diligence as a curator to research his inspiration and, also, I guess I happened to have the time, and it rekindled something I hadn’t really explored since high school: my interest for science fiction. I am not a huge connoisseur of the genre, but I was definitely a fan at the time, and I had not really kept up with it, except for J.G. Ballard, and I hadn’t read all the classics, and that is definitely a classic.

Weidenbaum: At what point while reading it did the density of the sonic references occur to you?

Migone: It was at some stage through that initial (research) reading. I’m not sure at what exact page or chapter, but I started circling. Well, first I started underlining, which is what I usually do, you know, bits of interest, and moments where sound or sounds were referenced. And that wasn’t even for that particular curatorial purpose, but since my field is primarily sound, the evocation and linking of this Martian landscape to these inhabitants and the way they are communicating, and Bradbury’s embodiment of that through sound piqued my interest. And the more I noticed, the more my underlines became circles, and so I circled those parts, which I usually never do in books, and even just in the act of circling, it made me realize that it might not be fulfilling my own interest for a nebulous future purpose, but it was becoming a piece. It didn’t quite have a form, but I knew fairly quickly that I was going to do something with it.