Two compact Roland speakers sit toward the top of the blank white walls. The speakers are set diagonally across from each other in the back room of the Spencer Brownstone Gallery in lower Manhattan. A voice, female and soft, doesn’t fill the space so much as lightly accent it. It sings, “Sail on ”¦ sailor ”¦” out of one speaker, then out of the other. The voice is that of artist Kristin Oppenheim. This is the most basic form of round, and it’s all the more beautiful for its simplicity; the bars slightly overlap, like waves. 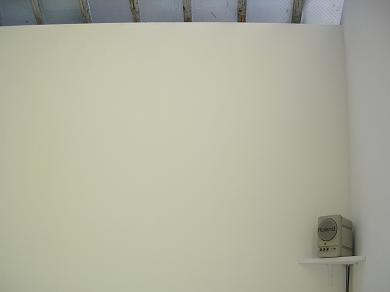 Waves come to mind not just because of the tune, itself a reduction of a Beach Boys song, but because to make it to the back room, one must wade through a variety of sea-based and otherwise aquatic-themed work. It’s a group show, titled ‘Til I Die, which Spencer Brownstone is hosting through August 18. Like Oppenheim’s piece, the show takes its title from a Beach Boys song, and though many of the pieces here are based in photography, sculpture or printing, there is a considerable amount of sound.

On opening night back in mid-July, the duo Growing performed, and they left behind a video, which is shown projected on a wall. At first it appears like footage of the seashore, but in fact it is two images of the seashore, one upside down; they meet at the horizon. The audio, played on headphones — an increasingly common art-gallery accessory — is crunchy, mangled, psychedelic noise. Growing’s participation in ‘Til I Die is a great example of how the worlds of music and sound art are intermingling. 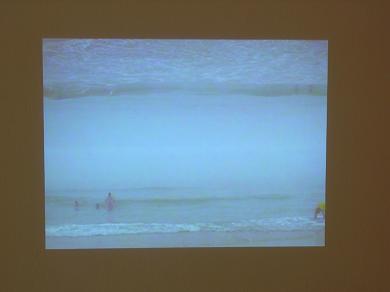 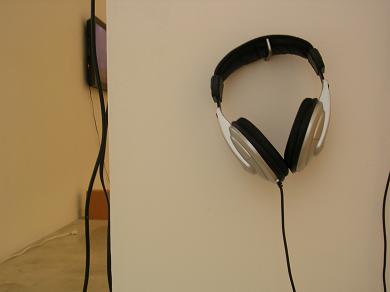 Nearby, Tara Sinn‘s mix of surreal images atop op-art motion graphics plays on a bright red television. The headphones emit a run of notes on electric piano, as hypnotic as the visuals. Not all video art with sound is, necessarily, sound art; some is simply audio-visual. The score to Sinn’s piece in ‘Til I Die brings to mind the rigors of minimalism.

Sound plays a lesser role in Ian Burns‘ “Ice (Version 3): Ode to Lady Jane,” but the work is astonishing. At first it seems like two separate pieces. First, a video screen showing slightly out-of-focus images of some arctic seascape ”¦ 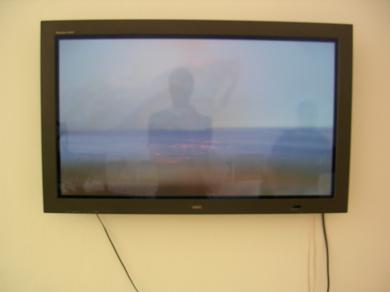 ”¦ and next to it, a Rube Goldberg”“like contraption of framed images, plastic, lights, wood, wire and gears. Here is a detail: 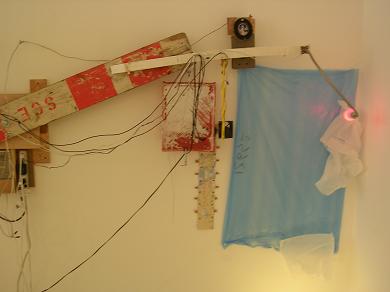 What takes a little while — or, fortunately for me, a helpful gallery employee — to sort out is that the two aren’t just related; they’re one single piece. That small black box seen near the center of the photo above contains a very small camera. The camera is aimed to the right, and thanks to Burns’ visual alchemy that blue plastic sheet becomes water, the white sheet becomes an iceberg, and the red light becomes a setting (or rising) sun reflected in the ocean. The ocean bobs and weaves as the sculpture itself moves up and down.

There’s also audio in Burns’s piece, what sounds like a field recording. According to the gallery, the audio, unlike the image, is pre-recorded. Perhaps in Version 4, Burns can mic something in the sculpture to provide the sound. We may know soon. Starting September 12, he’ll have a solo show up at Spencer Brownstone.

PS: Ian Burns later wrote to me via email to clarify the audio aspect of his piece. The additional information is greatly appreciated:

The soundtrack on my piece is made live by the sculpture as well as the video. The small camera has has a microphone on it and a fan blowing air across this is used to generate the audio feed. All the pieces of this type that I do generate live video and audio feed — either via the camera microphone or a piezo disc.