The latest release from the adozen netlabel is a death-ambient grab bag. Titled Synken Outtakes and credited to longtime outward-electronic figure O.S.T. (aka Chris Douglas), it collects two dozen relatively brief tracks — they top out at just over five minutes, with over half under two minutes. Each and every entry could serve as a pace-setting cue in an urban thriller, all rattling, jangling, echoing nuance, like the bug-like white noise of “Frosis,” the rock-guitar effluvia of “Miv Rone,” and the hypnotic cymbals of “Digisn” (MP3).

In fact, the audio segments are just a dip into a deeper pool, some 600 of which were composed by Douglas as part of a project that paired him with the visual-production crew Transforma (Baris Hasselbach, Luke Bennett and Simon Krahl). The Synken website, synken.com, includes three additional soundtrack excerpts, a sunken treasure titled “Porg” (MP3), a dank, threatening bit of minimal techno titled “Lides” (MP3), and a glisteningly glitchy affair titled “PKV Anal” (MP3). Douglas has explained his production techniques by stating that “most of the tracks here are played on instruments (piano, organ, melodian, melodica, harmonica, vibraphone, guitars, zitars) then processed with either analog or digital effects.” 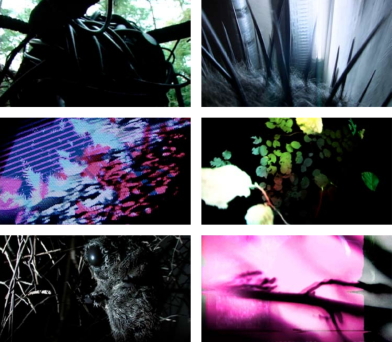