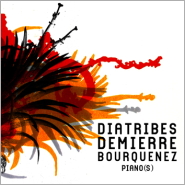 The group Diatribes mixes percussion, piano, and software in the interest of sonic exploration. As heard on their recent Insubordinations netlabel release, they take an approach firmly rooted in the clanky, fluid, theoretically rigorous yet sonically elastic techniques of European free improvisation. Witness Cyril Bondi (drums, percussions) and D’Incise (laptop, objects) mixing it up with a pianist (Jacques Demierre on three of the album’s five tracks, Johann Bourquenez on the other two): “Chants Ã‰vadés” (MP3) is all fragmented pianism and round-the-outside drumming, but shot through with wavering synthesized sound, a groggy drone that holds the whole thing together. “Et Puis Partir,” in contrast, is more willfully haphazard, less about anything closely approximating song, and more a matter of noise for its own intrinsic sake, each instrumentalist locating small sounds, from hazy upper-register playing by Demierre, to tribal taunts from Bondi (MP3). The introduction of D’Incise’s laptop into the sound world of free improv makes perfect sense, given free improvisation’s ever-present focus on using familiar instruments to make all manner of unfamiliar noises. The laptop expands that palette considerably, and at no point in these sets stands out as inappropriate or jarring. All five tracks were recorded live, the Demierre ones in Geneva in May 2008, the Bourquenez in Lausanne in September 2008. Get the full set at insubordinations.net. More on D’Incise at dincise.net.