There’s an aviary in the rotunda of the City Hall of San Francisco, and water features, too. Well, at least it sounds that way, and will through May 8. That’s the last day of Bill Fontana‘s “Spiraling Echoes, an installation that uses echolocative technology to beam specific sounds to specific spots in the public space. The sounds, which include tweety birdsong and watery glushing, as well as the ring-ring of cable car bells, are all taken from the San Francisco soundscape.

Up at his website, resoundings.org, Fontana has provided two means by which to experience the sounds of “Spiraling Echoes” from afar. There’s a stereo mix of the four-channel projection (MP3):

As well as a field recording of the rotunda floor, and the mix of its inherent ambient noise and the projected sounds (MP3):

As the latter recording shows, the sounds are subtly applied, and can even be subsumed by the goings-on within City Hall. That was certainly the case this afternoon when, in between having lunch in the Mission and catching The Watchmen a few blocks north of the Civic Center, I stopped into City Hall to experience Fontana’s “Spiraling Echoes” first-hand. It was difficult at best to tease out Fontana’s sounds given all the civic-wedding-related festivities going on. I’ll go back on a quieter day, to check it out again.

One important facet of Fontana’s installation is that the sounds aren’t still. The sonic projections move through the rotunda, thanks to motorized systems such as the one pictured below. (Photo courtesy of the Fontana website.) 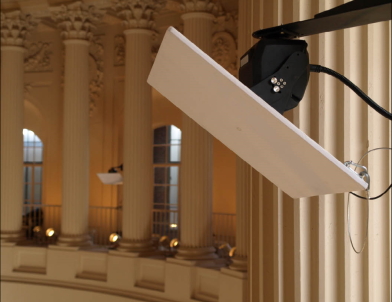 More information at sfacgallery.org, and in an interview with Fontana by Jesse Hamlin of the San Francisco Chronicle at sfgate.com. The article describes the piece’s source material as follows: “it’s a shifting wash of ambient sounds that subtly evokes the Bay Area: nautical bells and red-winged blackbirds, foghorns, skylarks, the melodious flow of underwater currents recorded near the Farallon Islands, streetcar bells and bits of speech from a post-election Proposition 8 protest.”