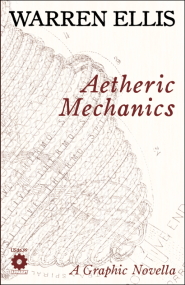 Q: What’s it like in space? A: It sings. The vibrations from the spin of the drive arms, sir, and the motion of the heat through the casements to space, which is very cold. The whole ship sings quietly, like a gently struck tuning fork. The Earth and the sea, sir, they have a mighty number of things to recommend themselves to me. But once you’ve heard the song of a spaceship, you’d never be anything but a Royal Naval outer serviceman.

An “outer serviceman” is an astronaut in this alternate history sci-fi story. Elsewhere in Aetheric Mechanics, two other characters — steampunk visions of Sherlock Holmes and Dr. Watson — discuss a “spring heeled jack,” but they’re talking about the British mythological figure, not the electronic-music duo. 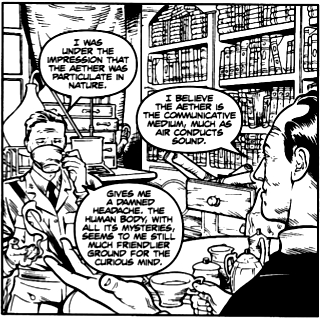 More at the website of the publisher, avatarpress.com, and the author, warrenellis.com.