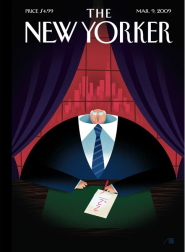 From “Wiggle Room,” a short piece of fiction by the late David Foster Wallace, from the March 9 issue of The New Yorker:

“The room was silent, except for the adding machines and the chattering sound of that one kid’s cart that had a crazy wheel as the cart boy brought it down a certain row with more files, but also he kept hearing in his head the sound a piece of paper makes when you tear it in half over and over.”

The “he” in the room is an IRS auditor, a character in a longer work, Wallace’s third novel (The Pale King), from which this short story is excerpted, and which was in progress when he passed away by his own hand last year.

The story is online currently at newyorker.com.