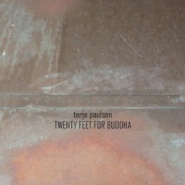 A little over a minute into Twenty Feet for Buddha, any fan of the Buddha Machine — the objet-de-sound-art by China-based duo FM3 — will hear a familiar drone, a slowly rising and falling hum, like a distant foghorn, arrive out of the dreary mist that had preceded it. This single, 20-minute track (MP3) is the most recent release on the netlabel restingbell.net, and was recorded by Terge Paulsen (whose contribution to a collection of string-based mixes was noted here last year: disquiet.com).

Paulsen’s use of the Buddha Machine is notable for several reasons.

The first reason is that he takes nearly full possession of the Buddha loops. The Buddha Machine is a small radio-like device containing nine individual loops, and there are two Buddha Machines in release thus far. The loops have been remixed by numerous musicians, but Paulsen makes them sound like they’re entirely his own. A key example is a certain piano loop — in fact the third loop from the second Buddha Machine — which thanks to the lulling backing tones and some occasional evidence of manual labor (like a cart being moved), sounds like a new composition.

The second reason is that manual-labor sound. In the online documentation of Twenty Feet for Buddha, Paulsen lists the components of the album as “treated field recordings and Buddha Machines.” This real-world audio, like wheels against stone, or something being dragged, introduces a sense of physical activity to the proceedings — not so much as to distract, but just enough to focus one’s imagination for a moment. Digitally produced abstract music can bring with it a weightlessness, the mistaken suggestion that effort wasn’t required, and the labor in the audio provides a keen parallel to the labor that Paulsen expended in the production of this track.