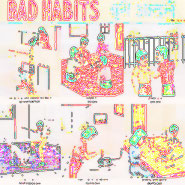 To begin with, the moniker MPC2059 is — despite certain alphanumeric appearances to the contrary — not yet another in the ongoing series of sample-based beat machines produced by the Japanese technology firm Akai. No, what MPC2059 is is an electronic act with a especially crunchy 8-bit sound, a deliberately lo-fi sensibility, and a truly cartoony post-apocalyptic outlook. Regarding the latter, its webpage, mpc2059.com, provides the following back story:

The year is 2059. We have just emerged from a 50 year global civil-war. Ecological disaster has not been averted. We have become increasingly reliant upon machine technologies. Our biological life support systems have failed. The vital impulse of our planet is artificial.

mpc2059 is the sound of that mechanical heart beat – machine music manipulated by biorobots for a new cultural computer controlled phenomenon”¦.

The 12 tracks on Bad Habits summon up childhood memories of early video game tomfoolery, but on machines that haven’t just seen better days, but have gone to seed. There’s the flanging, broken beat madness of the opening cut, “Stuck in an Airtight Sleeping Bag” (MP3), and the slurry vocoded fun of “You Keep Talking,” complete with percussion that blends hot jazz and minimal techno (MP3), not to mention the torqued beats of “Locked in a Closet” (MP3).

It’s not all damaged video-game noise. “Everyone Knows,” for example, has a synth-horn and hi-hat, approximating a kind of stripped-down funk adorned with squiggly electronic effects (MP3).