John Kannenberg is moving from Chicago to Ann Arbor to pursue an MFA in the Art & Design program at the University of Michigan. The founder of the great netlabel Stasisfield (stasisfield.com), and a talented musician, he has spent his remaining days in Chicago recording field documentation of his favorite sounds. Kannenberg’s effort makes for a nice counterpoint to the one recounted yesterday (disquiet.com), in which Michael Raphael marked his arrival in Brooklyn from the midwest with a pair of MP3s taped in his new living-room window.

In a pair of posts thus far (with more promised: johnkannenberg.com, johnkannenberg.com), Kannenberg has caught for posterity the afternoon traffic along Lake Shore Drive (MP3), as well as construction on Michigan Avenue (MP3), and the automated voices in Union Station (MP3). Between the two posts, there are 16 such tracks, each with accompanying commentary. Some, like the traffic, are presumably as close to eternal as an urban setting could provide. Others are more time-sensitive, such as the lovely snippet of what Kanneberg describes as “public euphoria” following a White Sox victory (MP3). There is also air-vent hissing, bird noise, fountains, and more.

This picture of Kannenberg, shot by Alessandra Gillen, accompanied the first of the two posts: 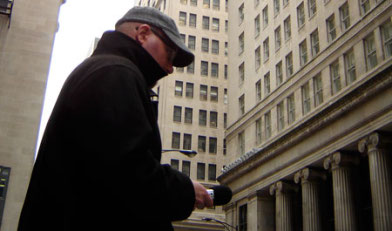 This is him on construction noise in the Modern Wing of the Art Insitute of Chicago (MP3):

A compact little field recording symphony. I love the way the drone of the equipment and the traffic interplay at first, followed by the construction worker’s whistling and the woman’s footsteps in the gravel. A great beginning, middle and end.

In another entry, he compliments a particular spot on its sounds and its vista, but touches on what could be called the Phonographer’s Dilemma: “A great place to stand and listen,” he says of the place, “but difficult to make a recording without the sound of other people on the observation deck!” Which is to say, the human ear can focus on fine aural details and sonic objects, but the microphone captures — for better and, more often, worse — everything.

Best of luck to Kannenberg in his his academic venture. No doubt his art, and thus our listening, will be all the richer for it.