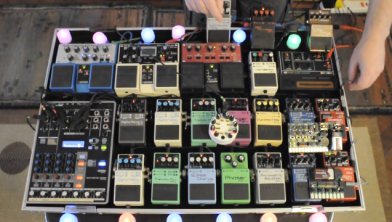 Just this morning, Chris Carter of Throbbing Gristle uploaded a free MP3 to the excellent audio-showroom service that is soundcloud.com. At his soundcloud.com/chris_carter page, there are now two free files available, the most recent of which is “Experimental Tribute” (MP3). It’s a rousing whorl of noise, deep thick echoes of counter-posed wave forms, and otherworldly sonic churn, atop a series of slowly alternating pulses.

If the whole thing sounds like the score to some 1960s sci-fi B-movie, the reason may be that what the track is a tribute to is the BBC Radiophonic Workshop, source of all forms of sonic experimentation (notably the eerie sounds of Dr. Who), and which would have turned 50 this year had it not been shuttered a decade ago.

Carter’s track also represents a fascinating aspect of Internet-based music, in that the recording is a real-time reaction by an artist to the news. The Workshop’s been the subject of anniversary reflections this week (bbc.co.uk, disquiet.com). We’re already used to seeing musicians, and other artists (and, more generally, public figures), blur the line between public and private online (Carter himself announced the track via his twitter.com/chriscarter account). Musicians giving us peeks into their studios and lives is one thing, but witnessing them respond to the world in a diary-like musical mode is something altogether more promising.

Carter has also posted video of the performance that led to the MP3 (at vimeo.com and flickr.com — from which the above still image was taken).

In addition, at three of those four web-based communal spaces (Vimeo, Flickr, and SoundCloud — and, soon enough, no doubt, in Twitter), Carter is conversing with commenters about the track. One of the early comments on the Vimeo thread is Carter’s fellow British musician Scanner, whom Twitter followers have seen communicating with Carter in recent weeks. Jokes Scanner, in reference to the array of effects involved in making “Experimental Tribute”: “Great fun there Chris (just hope you weren’t running on batteries!)”