● PDF: Pauline Oliveros Wins 2009 William Schuman Award (millertheatre.com): As music awards go, the William Schuman has been particularly open-minded. It's gone to classical-tradition figures like David Diamond, jazz-informed mavericks like Gunther Schuller, minimalists like Steve Reich, and out-jazz characters like John Zorn. There's something particularly gratifying about Pauline Oliveros being the recipient of the award this year, given that her work is so apart from the orchestral and chamber mode, in that she regularly emphasizes instructional works over precise written scores, employs electronic effects, and involves site-specific ephemerality. (She is also, it appears, the first woman to receive the Schuman.) The award will be presented to her on March 27, 2010.

● Four Sound Effects That Made (British) TV history (bbc.co.uk): For the BBC, Tom Geoghegan recounts accomplishments of the BBC's Radiophonic Workshop on the 50th anniversary of its founding — and a decade after it was closed. The focus of this piece is four sounds, and how they were created, among them the "Dalek voice" from the fabled science-fiction series Dr. Who: "'We tried to give the impression that whenever a Dalek spoke, it wasn't speaking like we do, it was accessing words from a memory bank, so they all sound the same — dispassionate, mechanical and retrievable.' He [Dick Mills] used a centre-tap transformer plugged into the microphone of an actor standing at the side of the set, and the threat in the voice was all in the performance." (Via londonsoundart.wordpress.com.) 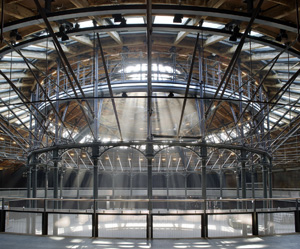 ● More on David Byrne‘s London Edition of ‘Playing the Building’ (davidbyrne.com): I missed this when it occurred in downtown Manhattan last summer, by just a day. Now, in advance of its August 8-31 run in London (at the Roundhouse — see image above), on David Byrne's site there is substantial coverage of his "Playing the Building" piece, including documentary video footage — not only of the Battery Maritime Building event, but also the earlier one in Stockholm from 2005 — and links to press accounts.

● 11 Things to Do with a Buddha Machine 2.0: Jesse Jarnow lists almost a dozen options for the FM3-created sound-art object the Buddha Machine 2.0, including #7: "Go to LaMonte Young's Dream House. Upon exit, use pitch control to match drone, carry vibe home with you."