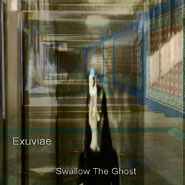 Lots of aural turmoil on the new Dark Winter netlabel release, Swallow the Ghost by Exuviae. More like Gargling the Ghost, there’s so much retching static, sonic jetsam, and masticated sampling going on. There’s the occasional slowing of pace, such as in “Lazarus Requiem,” with its syrupy synths, all ringing like banged metal (MP3). “The Thirteen” similarly unfolds at a more patient speed than much of the album — speed here is relative, less a matter of pounding downbeats than of rapidly circulating sine waves, and chaotic grinding of noises — though true to the ghosts of the album’s title, the end effect is arguably more, rather than less, settling (MP3).

Get the full set of 10 tracks at darkwinter.com. More at the artist’s website, exuviaemusic.com.