There are 1,111 clocks ticking away in the tower of Perrott’s Folly in Birmingham, England: one on the ground floor, ten a floor up, one hundred the floor after that, and, as pictured here, one full thousand on the top floor. Thus it is a tower of clocks, rather than a clock tower: 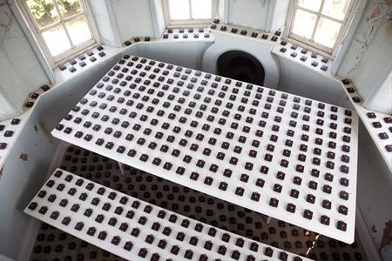 The exhibit, titled “The Tower of Time,” is by Japanese sound artist Yukio Fujimoto. I’m disappointed I didn’t make it to the exhibit during my trip, this past week, to Birmingham, but it’s up through July 26 — perhaps I’ll still make it back. The Folly was reportedly an inspiration for the Two Towers in The Lord of the Rings by JRR Tolkien, who grew up in the area. (And, yes, this is now the second Tolkien reference on this website in as many days.) More on the exhibit at ikon-gallery.co.uk, and on the re-opening of the tower at bbc.co.uk.

One thought on “Image of the Week: Tower of Clocks”